Apple may have cancelled its iPhone 4S launch in Beijing after fights broke out between scalper gangs and SWAT teams were called in to control the crowd, reports M.I.C. Gadget.

Lines outside the Apple store in Beijing's Sanlitun district show no signs of shortening, causing frustration for the thousands of fans and scalpers desperate to get their hands on the iPhone 4S. Now some of that disappointment is turning to anger, with reports of fights breaking out between gangs of scalpers, and guess what, Beijing SWAT teams arrived. So, the Apple store employees later announced that the launch of iPhone 4S is cancelled at the Apple's flagship store in Beijing, and all scalpers are pissed.

M.I.C. Gadget has heard that 99% of those lined up at the store are scalpers who have organized into teams of 30-50 scalpers. When Apple did not open the door at 7 o'clock the scalpers became irate, shouting profanities at Apple, pelting the store with eggs, and threatening to beat up security and police officers. 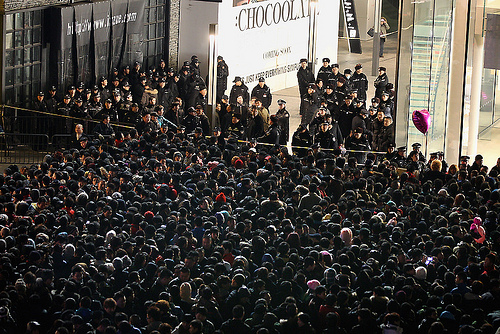 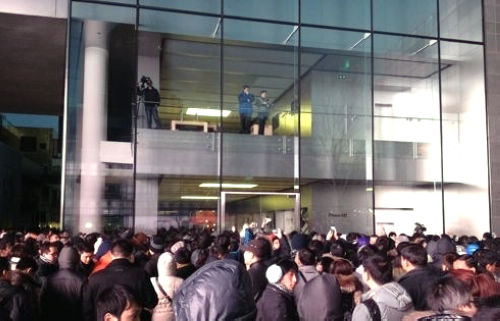 Antimodemfirmware - January 13, 2012 at 1:30pm
Just like a bunch of Chinese people to go crazy over an iPhone! If you post an ad on Craigslist selling one you'll get 1000 calls asking wat's da modam firmwaare lmfao. I know it's spelled wrong I did that on purpose trying to demonstrate how they talk. The even funnier part is the phone you list will be CDMA which the modem firmware us irrelevant because you can't unlock a fing CDMA phone. There is no sim slot you jack ass's!
Reply · Like · Mark as Spam
0

haha - January 13, 2012 at 5:40pm
You are absolutely right man!! they bunch fucking idiots! They go crazy over an iPhone. I see them all the time at apple store they buy like 4-5 iPhones at the same time. Theyr bunco of scammers and they lie like mutha fuckers I fucking hate chinese fucking assholes
Reply · Like · Mark as Spam
0

Vang - January 13, 2012 at 6:59pm
Yes we are rather rich Asian people. Unlike them credit living white man. Always broke. Fuc:k: a white man. Screw blacks too. The last and the least the dam Hispanics. Can't stand you f:ucks!!
Reply · Like · Mark as Spam
0