Apple has filed a claim with the orld Intellectual Property Organization (WIPO) seeking to gain control of the iPhone5.com domain, reports Fusible.

Anyone who visits the website of iPhone5.com today will be greeted by smart phone advertisements and online forums discussing the iPhone 5. Although Apple has been known to open its wallet to acquire domain names, in the past year it has selected to go the Uniform Domain-Name Dispute-Resolution Policy (UDRP) route. And it's had a lot of success.

Notably, Apple usually tries to obtain domain names after its launches a product. With iPhone4.com it took the company nearly a year to gain control of domain. With iPhone4S.com it didn't seek control of the domain for weeks after the smartphone launch.

There has been a lot of debate over what Apple will name its upcoming smartphone. The main contenders have been iPhone 5, iPhone 6, and the 'new iPhone'. It's unclear if Apple's attempt to gain ownership of the domain gives any added weight to the 'iPhone 5' name. 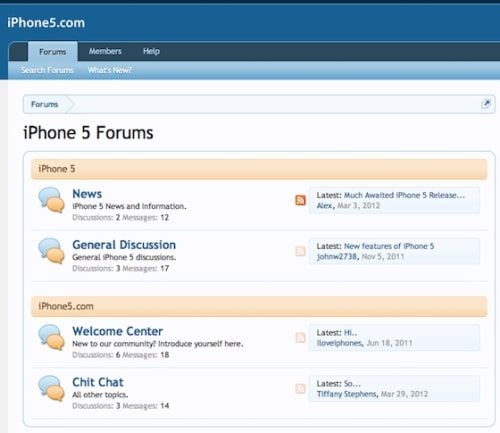 unklbyl - May 7, 2012 at 12:26pm
I own fixthesix. Is apple gonna come after me because they know the iphone 6 will have to be fixed? This is typically called piss poor prior planning. The only way to fix it is, well, take someone to court and whine. If someone owns the domain name, BUY IT! If apple wants to take me to court for planning ahead, i would loose, but the newspaper would sure as heck find out about it. unklbyl
Reply · Like · Mark as Spam
Recent