FORTUNE has collected professional and independent estimates of how many iPads were sold last quarter.

Among the professionals, the estimates range from low of 12.68 million iPads from Wedbush's Scott Sutherland to a high of 18.5 million from Cowan's Matthew Hoffman. The average estimate from this group is 15.07 million.

The average among the independents is 19.88 million -- 4.82 million (32%) higher than the pros and more than double the 9.25 million sold in the same quarter last year. The low estimate in this group was 17.7 million from Alexis Cabot, a American ex-pat living in Rome, and the high was the 24 million submitted by Asymco's Horace Dediu.

FORTUNE also looked at the six independent analysts with the best track record over the past seven quarters, their consensus is 18.6 million iPads, a year-over-year increase of 101.2%. 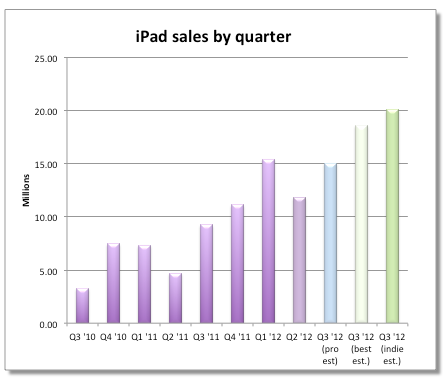 NoGoodNick - July 9, 2012 at 2:50am
You may use information on Apple products and services (such as data sheets, knowledge base articles, and similar materials) purposely made available by Apple for downloading from the Site, provided that you (1) not remove any proprietary notice language in all copies of such documents, (2) use such information only for your personal, non-commercial informational purpose and do not copy or post such information on any networked computer or broadcast it in any media, (3) make no modifications to any such information, and (4) not make any additional representations or warranties relating to such documents.
Reply · Like · Mark as Spam

NoGoodNick - July 9, 2012 at 2:49am
Apple reserves the right, at its sole discretion, to change, modify, add or remove portions of these Terms of Use, at any time. It is your responsibility to check these Terms of Use periodically for changes. Your continued use of the Site following the posting of changes will mean that you accept and agree to the changes. As long as you comply with these Terms of Use, Apple grants you a personal, non-exclusive, non-transferable, limited privilege to enter and use the Site.
Reply · Like · Mark as Spam

NoGoodNick - July 9, 2012 at 2:43am
If I don't get the first comment on new articles my penis gets smaller and right now it looks like a vagina.
Reply · Like · Mark as Spam

NoGoodNick - July 9, 2012 at 2:03am
Just what we need, a bunch more wild assed guesses about something that will be obvious in a couple of days. Please, spare us. When we start listening to the experts, we'll reinvest all the money we lost when we last listened to 'experts'. Experts are wrong more often then they're right, and the very best Wall Street experts are no better than flipping a frigging coin.
Reply · Like · Mark as Spam
Recent