Ovie Carroll, director of the cyber-crime lab at the Computer Crime and Intellectual Property Section in the Department of Justice told attendants in a computer forensic conference in Washington, DC that the beefed up security in iOS ever since its original launch has made it a night mare for law enforcement.

"I can tell you from the Department of Justice perspective, if that drive is encrypted, you're done," Ovie Carroll, director of the cyber-crime lab at the Computer Crime and Intellectual Property Section in the Department of Justice, said during his keynote address at the DFRWS computer forensics conference in Washington, D.C., last Monday. "When conducting criminal investigations, if you pull the power on a drive that is whole-disk encrypted you have lost any chance of recovering that data."

Technology Review explains that the original iPhone ran all applications with root privileges, giving each app complete control over the phone. Hackers could find exploits in those apps and take over the phone from there. But since then, Apple has invested lots in iOS security, and now each app runs in its own "sandbox."

Apparently, Apple is protecting customers' content so well that in many situations it is almost impossible for law enforcement to perform forensic examinations from seized devices. 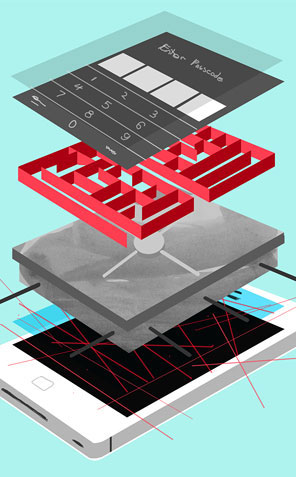 John Doe - August 15, 2012 at 2:23am
Misinformation is the rule here. Although it might be true that is hard to break into an iPhone they DO have ways to do so.
Reply · Like · Mark as Spam

Rockne1865 - August 14, 2012 at 3:17pm
Knowing the root password will not get you in you need the crpto password, that said not sure I believe them but for the cop on the street that stops you
Reply · Like · Mark as Spam

NoGoodNick - August 14, 2012 at 4:12am
I don't feel sorry for them, with all the laws against everything, you never know when some cop is going to claim a need to search your device. Though it's really stupid for them to announce they're 'powerless' to do anything about it.
Reply · Like · Mark as Spam