Apple is working an improvement to AirPlay that would drop the requirement of a Wi-Fi network, according to a report from The Telegraph.

The new version will require just speakers or a hifi and an iDevice; the iPhone, iPod or iPad would form its own network to allow a direct connection and music playback. The move is expected to be announced at the launch of the new iPhone, which is widely rumoured to take place on September 12.

The feature is being called 'AirPlay Direct'; however, this is a working title and may be changed before release. Apple will reportedly push the technology alongside its shift to a smaller dock connector. 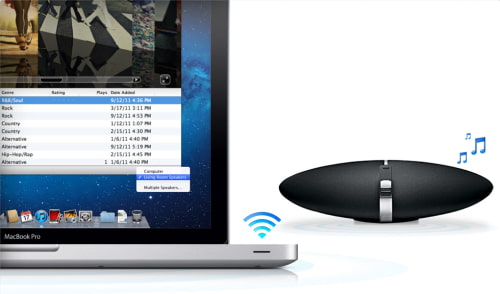 NoGoodNick - August 29, 2012 at 3:07pm
The title of the article is misleading. You mean it'll either use bluetooth or create it's own network, rather than using 3G or 4G networking?
Reply · Like · Mark as Spam

jMa - August 29, 2012 at 4:09am
Doesn't this defeat the concept of AirPlay letting your iOS device exist anywhere in an area, even if speakers are far away? Might as well just use Bluetooth. Close to the same range that an ad-hoc network for "AirPlay Direct" would provide.
Reply · Like · Mark as Spam

me - August 29, 2012 at 5:55am
It's probably the same as AirDrop but dedicated to media streaming. Remember that AirDrop IS a WiFi network, but connecting to a wireless router isn't required (computers actually connect between each others using a "secondary" WiFi connection, something like Ad-Hoc and stuff).
Reply · Like · Mark as Spam