Apple CEO Tim Cook is on a trip to China and meeting with high-level officials, reports TNW.

Cook is said to have met with China’s Minister of Industry and Information Technology (MIIT) Miao Wei to discuss the state of the IT and communication industries in the country. He also met with the US Ambassador to China, Gary Locke, to whom he reiterated the importance of Apple's retail stores in the country.

Jim Sciutto, Chief of Staff at the US embassy in Beijing, tweets, "Amb. Locke just met with Apple's Tim Cook, who says Apple stores in China are their 'busiest in the world'".

The purpose of Cook's visit to China is unclear; however, TNW suggests that perhaps its to ease pressure ahead of a Chinese New Year where Apple may need to keep production lines running. It's also suggested that Cook could be visiting with China Mobile in an attempt to reach a distribution deal with the company. 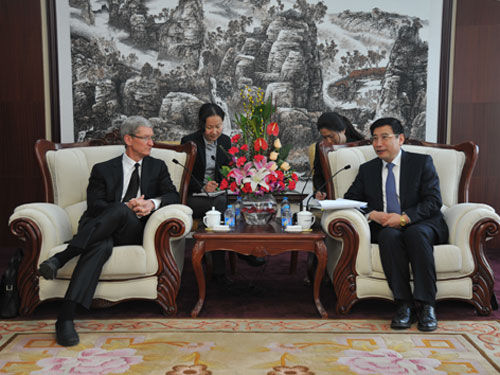 Eram - January 8, 2013 at 2:51pm
He's wearing a dockets Shoes.Should be wearing bailey!s shoes made in Italy best shoes in the world . But Americans don't care about cloths they wear the same shit everyday
Reply · Like · Mark as Spam

ahmad - January 8, 2013 at 2:30pm
i wish tim cook listen to the customers and make the ios open source like android beacuse ios still from 2007 the same no changes shitttttt
Reply · Like · Mark as Spam

ak[phlegm]med - January 8, 2013 at 2:39pm
No, I hope they don't. I believe they won't. Probably never going to happen. If iOS doesn't work for you, then go ahead and pick something else. Your idea doesn't make any sense, business wise. Your opinion only goes to the minority.
Reply · Like · Mark as Spam
Recent