In accordance with the subscription accounting treatment required by GAAP, the Company recognizes revenue and cost of goods sold for iPhone and Apple TV over their economic lives. Adjusting GAAP sales and product costs to eliminate the impact of subscription accounting, the corresponding non-GAAP measures* for the quarter are $11.8 billion of "Adjusted Sales" and $2.3 billion of "Adjusted Net Income."

"Even in these economically challenging times, we are incredibly pleased to report our best quarterly revenue and earnings in Apple history -- surpassing $10 billion in quarterly revenue for the first time ever," said Steve Jobs, Apple's CEO.

Apple will provide live streaming of its Q1 2009 financial results conference call utilizing QuickTime, Apple's standards-based technology for live and on-demand audio and video streaming. The live webcast will begin at 2:00 p.m. PST on January 21, 2009 at http://www.apple.com/quicktime/qtv/earningsq109/ and will also be available for replay for approximately two weeks thereafter. 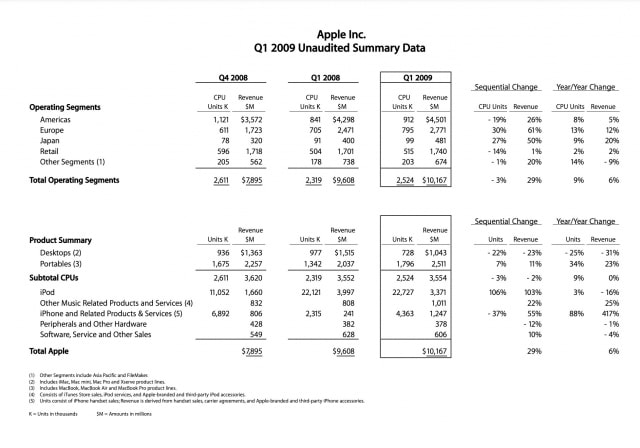