iPhone 2.2.1 Software Update
This update contains bug fixes and improvements, including the following:
- Improved general stability of Safari
- Fixed issue where some images saved from Mail do not display correctly in the Camera Roll

****If you wish to remain jailbroken or unlocked please do not install this update until the iPhone Dev-Team has released an update method. 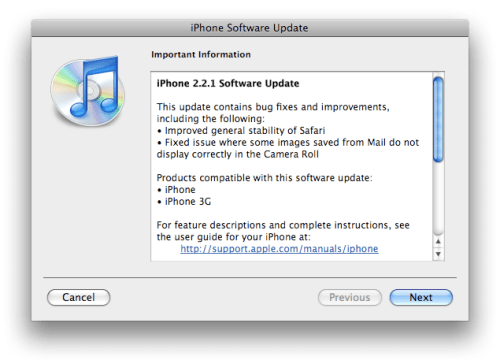 Oliver Dominguez - January 28, 2009 at 6:46pm
We waited all this time for THIS? Where is push notification? Where copy & paste? Where all the things we've been waiting for? Is apple not listening to their customers anymore? Things used to be so different with them in the past, what happened?
Reply · Like · Mark as Spam
0

Djuro - January 27, 2009 at 2:21pm
Be aware that this update fixes yelowsnow wunerability so don`t update if you want to unlock/jailbreak your iPhone ;)
Reply · Like · Mark as Spam
0

Chief - January 27, 2009 at 3:04pm
haha they should have listed that in what the update did. Figures why they've pushed it then.. it's been awhile since the last update.
Reply · Like · Mark as Spam
Recent