Rentrak Corporation has announced the release of FilmScope and FilmScope Worldwide, the first consumer applications from Rentrak's Theatrical Group for use on Apple's popular iPhone and iPod touch. FilmScope will provide film enthusiasts with top line U.S. domestic box office results and expanded film information, and FilmScope Worldwide will offer an international perspective with box office intelligence on multiple international territories, all of which was previously only available to Rentrak subscribers.

Fans can easily search for films through the "Smart Type" feature, which allows FilmScope users the ability to quickly look for movies by actor, director or title. The calendar tool provides a schedule of upcoming film releases, while the "Top Films" section allows movie lovers to view the top films of all time based on genre, rating or release year.

An indispensible tool for movie fans, FilmScope also allows users to read reviews and purchase movie tickets via their iPhone or iPod touch.

"Film fans have never been able to access this level of detailed information so quickly all by using FilmScope," said Ron Giambra, executive vice president of theatrical, Rentrak. "FilmScope allows iPhone and iPod touch consumers a fun and comprehensive way to find out everything they ever wanted to know about new and previously released movies and the actors, directors and studios behind them."

FilmScope is now available for download on the App Store for a one-time fee of $4.99 for U.S. domestic box office information and $9.99 for FilmScope Worldwide. FilmScope works with iPhone 3G, the original iPhone, and iPod touch. 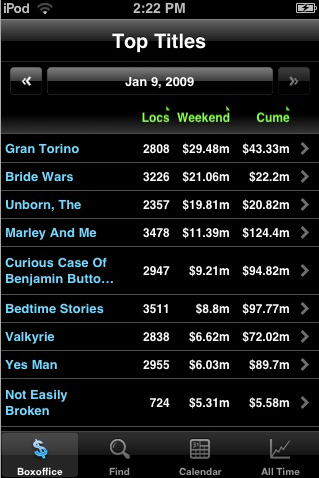 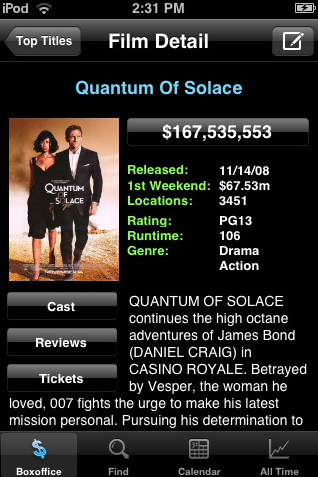 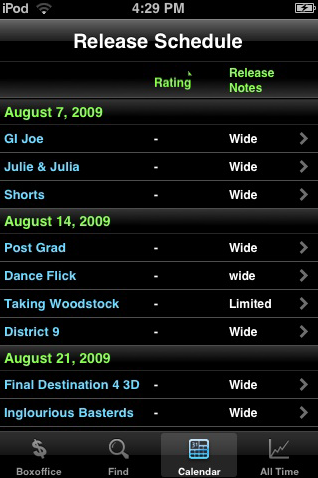