Ergonis Software has announced KeyCue 4.4, the company's popular keyboard shortcut cheat sheet. With the release of KeyCue 4.4, Ergonis Software takes the popular cheat sheet tool for discovering and applying Mac OS X keyboard shortcuts to the next level. In addition to keyboard shortcuts for application-specific menu commands and Keyboard Maestro macros, the new version adds support for system-wide hotkeys. Furthermore, the new version includes a number of other improvements and fixes, like support for function keys F16 to F19 on aluminum keyboards and improved display of shortcuts that include the space bar.

"KeyCue now shows many system-wide shortcuts that you will not find in any menu. In combination with application-specific menu shortcuts, KeyCue displays a wealth of information for power users as well as people who are new to the Mac," said Christoph Reichenberger, founder and CEO of Ergonis Software. "Knowing about these function keys and learning how to tap their full potential will drastically improve your productivity."

The productivity paradox of keyboard shortcuts is that shortcuts were designed to increase productivity. However, productivity actually decreases when applications provide large numbers of shortcuts, in particular when the shortcuts are defined inconsistently across applications. KeyCue's elegantly simple solution is to detect and display an instant overview of all shortcuts, i.e., the overall functionality of any application as well as dozens of system-wide functions that are available across all applications. Over time, KeyCue users will automatically remember frequently used shortcuts and start working more efficiently.

KeyCue has already received many awards, including a 4.5-Mice award from MacWorld magazine.

KeyCue can be purchased securely on the Ergonis Software website. The upgrade to KeyCue 4.4 is free for anyone who has purchased KeyCue in the last 2 years. For information about purchases, including enterprise licenses, volume discounts, and upgrade pricing offers, see the company's web site.

Instead of purchasing KeyCue by itself, customers can get the Macility Productivity Bundle that also contains two of the company's other productivity tools, PopChar X and Typinator. The pricing of the Productivity Bundle represents a saving of more than 35% over the separate purchase of its components. 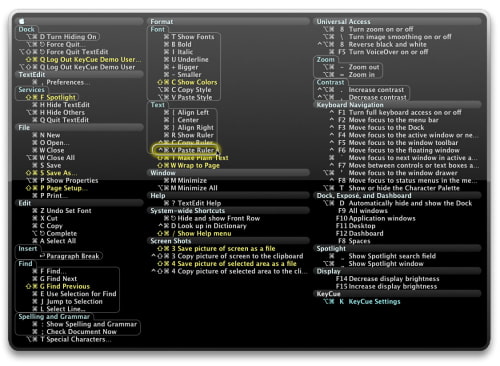