Google has announced a major revision to Gmail for iPhone and Android devices.

-----
Today we're introducing a major revision to Gmail for mobile that takes advantage of the latest browser technology available on iPhone and Android devices. We've updated the user interface, made it faster to open messages, allowed for batch actions (like archiving multiple messages at once), and added some basic offline support

Despite the advent of 3G networks and wifi, smartphones still lack a high-speed, always-on broadband connection and can have connections far less reliable than their desktop brethren. So, just like when we redesigned the Gmail for mobile client app last October, we've gone back to the drawing board and redesigned Gmail for the mobile browser to overcome some of these limitations. We made performance more consistent, regardless of connection type, and laid the foundation for future improvements.

Now, when you go to gmail.com from your iPhone or Android browser, archiving email is quicker because it doesn't require a response from a remote server. Instead, we cache mail on the device itself (using database storage on the iPhone and a device-local mobile Gears database on Android-powered phones). Actions like archiving or starring messages are first applied to this cache and then sent to Gmail servers in the background whenever a network connection is available. You only have to wait for a response from the server when you're requesting an uncached message or list of messages. As a result, you can start-up Gmail even if you're on a slow connection. You can even compose mail and open recently read messages while offline.

We made extensive use of other browser functions too: for example, the floaty bar that lets you archive, delete or apply more actions is animated via CSS transformations and controlled in part with touch events (when you scroll the screen, it follows you).


The HTML5 canvas tag is used to render the progress spinner without the overhead of downloading animated GIFs to the device. Now that we've developed a framework for the new Gmail for mobile, we're planning a whole lot more: faster performance, improved offline operation, new functionality, and interface enhancements that take advantage of the unique properties of smartphones.

To try this new version of Gmail for mobile, just go to gmail.com from your mobile browser. It's currently available on any Android-powered devices or iPhone OS 2.2.1 or higher.
----- 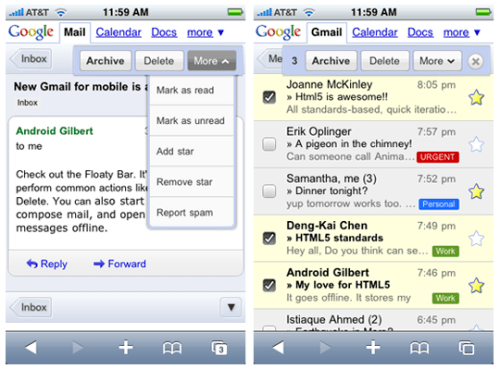