A recently published patent filing shows that Apple continues to work on a video answering machine for iChat, according to an AppleInsider report.

Alternatively, the video message could be sent when no user input has been received for a period of time exceeding a threshold, meaning the recipient is likely away from their computer. Similarly, the message could be provided when the value of iChat's status indicator indicates a "do-not-disturb" status.

"Thus, the video chat system can be used as an always-on service without unnecessarily interrupting the user while the user is engaged in another chat session or another task," Apple explained. "The audio-video messaging services are provided using an answering machine-type application that is familiar to most users who have used conventional telephone answering machines." 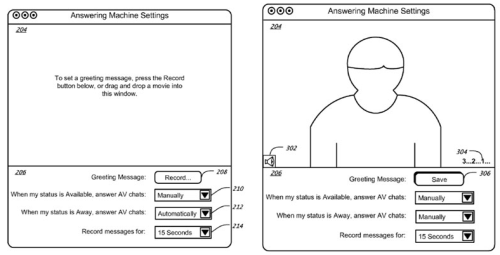