Apple has rejected the iPhone ebook reader Eucalyptus multiple times from the App Store for what might be the most ridiculous reason yet. The application accesses books that are all text-only, and are directly downloaded from the archives of the well-respected Project Gutenberg.

Eucalyptus was rejected because it's possible, after specifically searching for them, to find, download, and then read texts that Apple deems "objectionable". 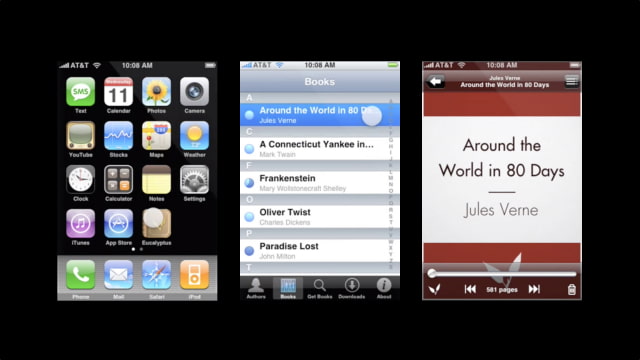 The example that Apple provided developer James Montgomerie was a Victorian text-only translation of the Kama Sutra of Vatsyayana. The same book that can be easily accessed via eReader, Stanza (multiple versions, some with illustrated covers), and Amazon's Kindle app; all of which are approved on the App Store.

Unfortunately, the developers correspondence and reasoning with Apple hasn't made them see the light and his application has been rejected multiple times.

I suspect that no-one at Apple knows how genuinely torturous the app store approval process is for developers personally after a rejection. When they hold the key to the only distribution pipe for something you've spent a lot of your time on - in my case a year - something you're hoping could provide you with a livelihood - and polite email enquiries are not replied to - not even with an autoresponder, it is extremely frustrating. I don't think I've ever felt as powerless in my life (and I've had to deal with US immigration authorities). I think anyone that knows me would confirm that I'm a very level-headed person, but this is the only thing in my adult life I can recall losing sleep over (although perhaps that's also a consequence of being otherwise lucky in life so far).

You can read his entire correspondence with Apple at the link below. Hopefully, someone fixes this.