GT Advanced has already begun shipping sapphire to Apple partners in China, according to a new reports from Matt Margolis and UBS.

Back in January, Margolis reported that not only does Apple plan to use sapphire glass for the iPhone 6 but that it could even function as a solar charging panel to improve battery life.

If you follow the Obscure Analyst, you would already know GT turned on 140 furnaces on January 10th, 2014 and UBS checks indicate that the “Quick Start 140” furnaces made their first delivery of sapphire ingot in to one of Apple’s partners in China who will make the sapphire covers. A sapphire ingot is a sapphire that is “cored” out of the boule that will need to be sliced into sapphire screens. UBS indicated that 2,200 kg of sapphire ingots were shipped to China for processing. I am estimating that approximately 100,000 to 115,000 sapphire screens could be produced from 2,200 kg of sapphire ingots. GT’s selling price per screen based on the information provided is falling into the range of $8.50 to $10 per screen.

Margolis is more optimistic than UBS about the sapphire furnace ramp up indicating that 1,200 furnaces were delivering to the Mesa, AZ plant prior to March 3rd and that doesn't include furnaces taken out of equipment inventory in Q4 ($71m worth), or $180m worth of PP&E that was deployed in Q4 2013 (mostly in AZ). He believes that nearly all the those furnaces were up and running by the end of March.

Recent reports have suggested that Apple and GT Advanced may be looking to expand operations at the companies' yet to be completed Mesa, Arizona facility. The expansion could accommodate higher yields for an unknown component. 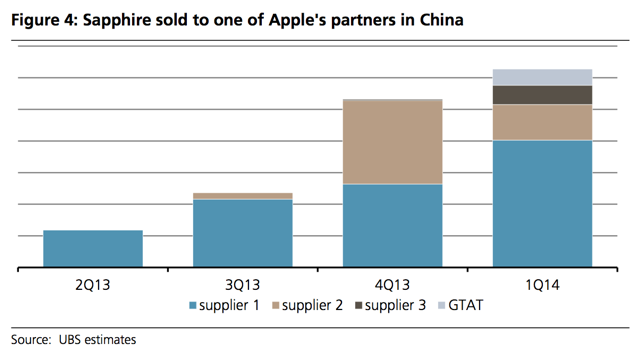