QuickerTek has just announced a new wireless internet and networking USB device that triples the wireless range. This new Quicky Jr. II is compatible with the Apple AirPort Extreme Base Station as well as almost every other 2.4GHz wireless equipment users are likely to run into while traveling. Quicky Jr. II is priced at $89.95 USD at QuickerTek dealers.

Quicky Jr. II simply plugs into the USB port of any Mac laptop. The single driver makes it all work, there are no extra steps to immediate wireless satisfaction. Whether using a coffee shop network or tapping into the network in the office, Quicky Jr. II provides increased range while maintaining speed.

Not only is Quicky Jr. II easy to use, it also weighs only half an ounce, so it's perfect for the Mac user on the go. It fits in your shirt pocket and no external power is needed, so there's no power brick to lug around. And like all good Mac products, it's styled to look right with any Apple laptop such as PowerBooks, MacBooks, MacBook Pros or iBooks.

Quicky Jr. II is fully compatible with all devices rated for 802.11n, 802.11b and 802.11g networking in addition to the Apple AirPort Extreme Base Stations. That means users can get up to 15 megabit per second transfer rates at the office, school, airport or any available wireless network. Quicky Jr. II also keeps your internet and network transfers safe with 64/128 bit WEP/WPA encryption.

QuickerTek innovated the Quicky USB wireless booster design years ago and this version is a smaller, lighter and more affordable version - so any Apple laptop user can expand their wireless performance.

Quicky Jr II is ideal for Apple MacBook, MacBook Pro and iBooks, but is equally at home boosting the wireless networking range of desktop Macs as well. Any open USB port will do.

The new Quicky Jr. II is backed with a one-year warranty on parts and labor. 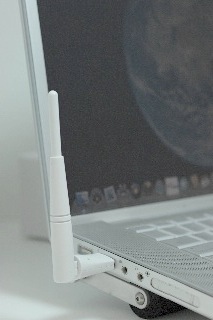 Vipey - June 30, 2009 at 11:20am
There are always two side to the coin when it comes to long range WiFi antennas. It is all good if you are in the country-side where you have no interference and find it hard to even get a signal. However, in the real-world of those who might use this "sexy" new device, there is a real problem. WiFi, or 802.11 standard works based on CSMA/CA. CSMA = Carrier Sense Multiple Access (commonly known as a hub... or shared bandwidth) CA = Collision Avoidance The problem lies with the "CA" portion. If your antenna is "too good", you will pick up the noise from surrounding areas and if it is strong enough, and your device/drivers are not good enough to filter out the noise, you will get very poor performance and even dropped carrier. The WiFi as we know today operates on the 2.4GHz ISM band and there is the 5GHz media band, which is extremely rare. Nonetheless, the 2.4GHz ISM band is broken up into 13 channels, which is recommended to skip two channels to guarantee no interference. Which means that in ANY given surrounding, you cannot have more than 5 wireless networks in the vicinity. Please do the math... now... with an even more powerful (I'm guessing) 7dbi antenna... noise will flow like in like there's no tomorrow. I wonder what the manufacturer have to say about that... if they have a good answer... I will seriously consider getting this new toy.
Reply · Like · Mark as Spam
0