Candywriter has announced the immediate availability of Word Solitaire, an iPhone and iPod touch app that combines word creation and classic solitaire. Word Solitaire cards are dealt just like the popular solitaire variant of Klondike but with a unique twist: instead of traditional playing cards, each card represents a letter of the alphabet. It's the user's task to stack cards on top of one another, create words, and expose more letters. Once all provided letters have been arranged into words, the user may advance to the next level.

Each of the 25 levels in Word Solitaire progresses slightly in difficulty, with more challenging letter combinations featured on the higher levels. At the user's disposal are a couple of tools. As in regular Klondike, a "Grab Deck" is available in which several reinforcement cards may be recruited to help form words. In addition, unwanted cards, such as dastardly Q's and X's, may be incinerated in the screen's crackling fire; but only three cards may be burned per level.

Word Solitaire is set on top of a classic art theme. Each of the 25 levels takes place above a different classical masterpiece by artists ranging from Dali to Van Gogh. Once a user has achieved a high score, fast time, or low move count to be proud of, the marks may be posted on Twitter directly from Word Solitaire.

Key Features:
* 25 beautiful levels, each with a high-resolution classical art background
* Intelligent decks that increase difficulty slightly with each level
* Customizable color themes
* Complete Twitter integration
* Millions of letter arrangements. No two games are ever the same
* Auto-save - Pick up your game where you left off, anytime

Pricing and Avialbility:
Word Solitaire costs less than a soft drink at $0.99 (USD) and is available now on the iTunes App Store. 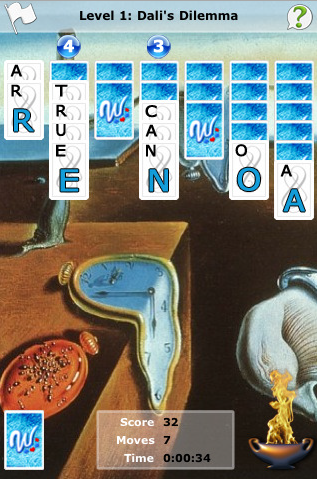 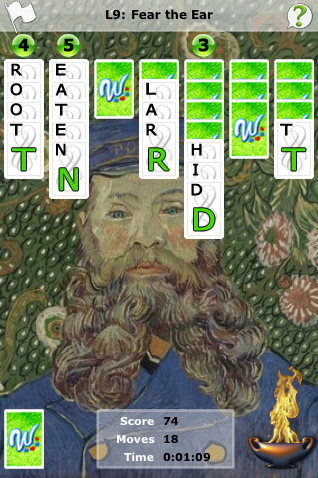