Here is the full email sent to employees from Tim Cook, obtained by iClarified.

With the holidays upon us and 2014 drawing to a close, it’s a great time to look back at this unforgettable year. Together we have reached new heights with our products and delivered Apple’s most innovative lineup ever. I’m immensely proud of the work that you and your teams are doing to make Apple a force for good in the world, both through our products and by making a difference on issues that touch millions of lives.

It’s been a year of amazing announcements across the board. Just this fall we had the biggest iPhone launch ever with iPhone 6 and iPhone 6 Plus, unveiled the thinner and more powerful iPad Air 2, introduced the new 27-inch iMac with its stunning Retina 5K display, and launched an entirely new category of service — Apple Pay — which is winning over banks, merchants and customers even faster than we had hoped. The App Store had a record-setting year and our software products, led by iOS 8 and OS X Yosemite, have never been stronger. During this busy holiday season, our store teams are doing a fantastic job introducing and answering questions about all of our products, and they’re doing it with the energy and enthusiasm that has always endeared them to our customers.

This year marked the 30th anniversary of the Mac, which has been the symbol of revolutionary technology since its introduction. Today, the Mac enjoys a wider audience than ever and the highest market share in almost 20 years. This achievement is a credit to our teams who are constantly innovating to make Apple’s products the best in the world. Year after year, the Mac gets better because we love it and we can’t stop thinking about the possibilities for what it can do.

We've made important decisions like acquiring Beats for its popular products and incomparable talent, and partnering with IBM to transform mobile computing in the enterprise. Each of these moves opens new opportunities for Apple, and their impact will continue to be felt far into our future.

Together we’re also making an impact on some of the most important issues facing society. Here in the U.S., we've made a bold commitment to provide technology for schools that need it the most. Apple is a leader in sustainability, powering our data centers with 100% renewable energy. The success of our company is creating jobs and opportunities for workers from all walks of life. We're dedicated to advancing equality, diversity and human rights in the workplace, from our corporate offices to the factory floor. And we’re defending our customers’ personal data because we believe they have not just an expectation but a right to privacy.

As the holiday shopping season kicked off in November, we teamed up with some of the most popular developers on the App Store for an unprecedented fundraising effort on behalf of (PRODUCT) RED. Developers created exclusive content for the campaign, with all proceeds going to the Global Fund to fight AIDS in Africa. In addition, Apple pledged a portion of our retail and online sales on two of the busiest shopping days of the year.

I'm thrilled to announce that our total donation for this quarter will be more than $20 million — our biggest ever — bringing the total amount Apple has raised for (PRODUCT) RED to over $100 million. The money we’ve raised is saving lives and bringing hope to people in need. It’s a cause we can all be proud to support.

In September, we gave a glimpse of the future with Apple Watch, our most personal device ever. Most customers will never know how hard you and your colleagues are working to make it a reality, but they will appreciate the depth of care and effort behind Apple Watch from the moment they put it on their wrist. People love Apple products, which means they love the work you do. The knowledge that you’ve done something great for someone else is a powerful reward — one which I hope you feel during the holiday season and throughout the year. There’s nothing else quite like it.

Enjoy this time with your friends and loved ones. I could not be more excited about what's in store for next year, and for the opportunity to work with all of you to make it happen. 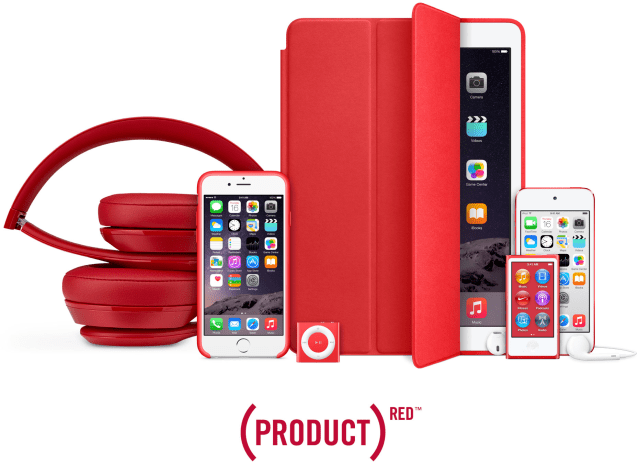 Gori - December 19, 2014 at 1:43pm
Why u guys are so sad in life. Appreciate what apple has done to world- best team, best leader, best work. I am proud to be owner of iphone, feel like part of apple world.
Reply · Like · Mark as Spam

joeblo - December 18, 2014 at 2:40am
you cannot use money to kill a disease that was created from the very foundation of a system that was built on money.
Reply · Like · Mark as Spam

Ren - December 18, 2014 at 11:51am
Who said anything about doing that? Allie mentioned was how many red products was sold, second, it's called donating in order to MAKE a cure and money is what helps out in case you didn't k ow.
Reply · Like · Mark as Spam
Recent