Yazsoft has announced Playback 1.0.3, an update to their new zero configuration media server for Mac OS X. With a focus on ease-of-use, Playback allows anyone to share their media with any Playstation 3, Xbox 360, or other UPnP compatible device. Playback can also share media stored in folders or even make entire disks available to a Playstation 3 or Xbox 360. No configuration required.

Playback is engineered for extreme performance, while at the same time delivering a streamlined design with unparalleled reliability and stability. By default, it will share almost any content on the users system. And Playback automatically integrates with iTunes, iPhoto, and Aperture too, making it a perfect complement to Apple's iLife Suite. Users can share all content from these applications transparently or choose specific playlists and albums.

Those who like to tinker will appreciate Playback's built-in Access Control List (ACL) and bandwidth throttling. The ACL allows users to control which devices have access to their media. Bandwidth throttling limits the transfer rate from the computer to their UPnP device. This allows others on the network to do other internet related activities, such as surf the web and check their email.

Playback was engineered for extreme speed, while offering complete control of shared content. Media is served via lighttpd, the same rock-solid technology that powers YouTube, Wikipedia, and many other popular sites. Playback sports many creature comforts as well, including Growl notifications, Spotlight based searching, on-screen thumbnails (powered by QuickLook), and much more. Playback even includes a handy Status menu which conveniently displays live stream info, at-a-glance.

* New: updated French translation
* New: reset the demo period so that users can try this updated version
* New: added a preference for the iTunes/iPhoto scan interval
* New: preference panels no longer need to be resized manually when new options are added
* New: added progress wheels for iTunes, iPhoto, and Aperture in main Playback interface. This makes it clear that Playback is doing something while large libraries are loading
* New: additional organization for iTunes movies: "Podcasts" and "Music Videos" folders
* Updated: additional testing for sleep
* Fixed: a XBOX bug when dealing with slideshows
* Fixed: a bug where folder listings wouldn't update on the PS3 when using the "Show me everything" option
* Fixed: preference refresh loop after restart
* Fixed: music albums are now sorted in proper disc order
* Fixed: various performance / interface improvements and bug fixes

Pricing and Availability:
Playback 1.0.3 is offered at the Introductory price of $15.00 (USD) for three (3) licenses, and can be purchased from the Yazsoft website. A free 7 day demo is also available for download. 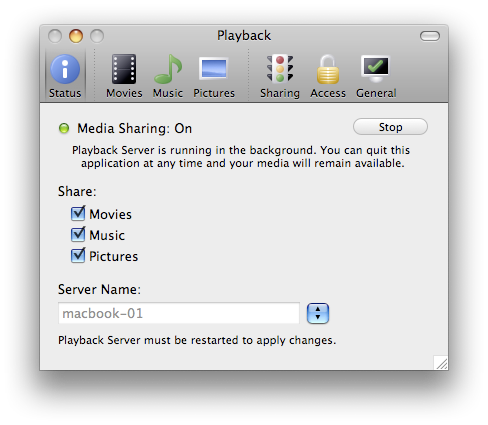