Useful Fruit Software has announced Pear Note 1.3, the latest version of their note-taking utility for Mac OS X. At its core, Pear Note integrates audio, video, and slides with traditional text notes and stores all of this on a timeline for easy navigation. Pear Note 1.3 adds support for easily highlighting the most important pieces of notes. Pear Note 1.3 also adds a new Quick List feature, enabling users to create lists or outlines without interrupting their note-taking.

Pear Note records audio or video while the user takes notes, allowing the user to later find what was being said when they typed something. They can then play back the entire recording, or jump to the point they need to hear.

Pear Note 1.3 sports many improvements to the note-taking experience. One of the most notable new features is the addition of highlighting support. With this feature, users can call out key portions of their notes by highlighting them. Advanced users can utilize different highlighting colors to indicate different focus areas and easily switch between those color on the fly.

Pear Note 1.3 also includes a new feature called Quick List. While previous versions of Pear Note supported lists and outlines, the new Quick List feature makes this much more seamless. Users can now start lists or outlines with a simple keyboard shortcut or toolbar button without interrupting the flow of their notes.

In addition to these key features, Pear Note 1.3 includes numerous improvements to the interface and bug fixes.

Pricing and Availability:
Pear Note 1.3 can be purchased for $39.99 (USD). A free fully functional 30 day demo is available for download. 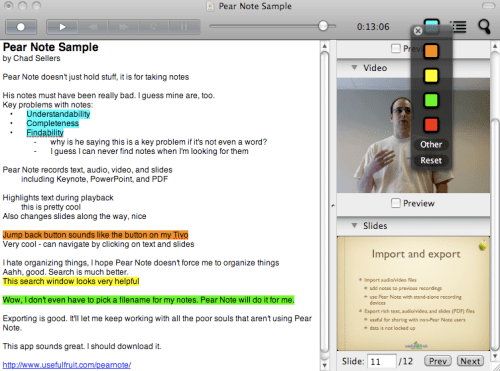