Apple has pulled the Commodore 64 Emulator application from the App Store after instructions were posted online on how to enable its hidden BASIC interpreter functionality.

The developers were required to remove the BASIC interpreter before Apple would approve the application; however, they apparently included the ability to remotely enable the interpreter in hopes that Apple would change their mind...

Unfortunately Apple this night pulled the C64 App from the App Store. We had agreed with Apple to remove basic from the application, but as we believed it would be possible to convince Apple to let it in later on, we left it in the app to be activated remotely by us when we had “go” from Apple.

Due to the extreme publicity the app has received over the weekend and the fact that several users found a way to enable the basic back, Apple decided to remove the app from App Store until we have solved the issue.

This is very frustrating as we had no intention of tricking basic into the app and the fix was done in a few minutes the moment we found out - a new version has been submitted to Apple, and we can only hope Apple will appreciate our efforts to apply the changes they need in order to put it back on. 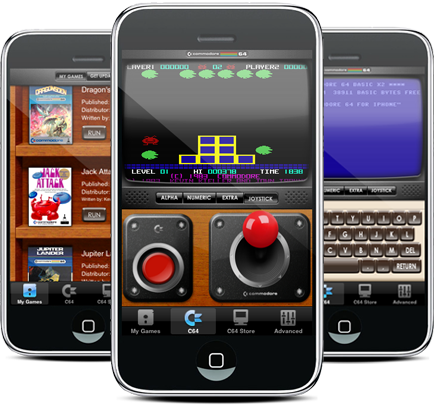 DNA - November 19, 2009 at 6:38am
Just wanted to mention I have updated my site with screenshots running custom games and using custom images/layouts even video of Bruce Lee running on the app.
Reply · Like · Mark as Spam
0

DNA - September 8, 2009 at 10:00pm
I have no doubt that if Apple were to re-approve the C64 Application that BASIC could still be enabled. I have been putting many hours into exploring this Apps functions and capabilities, and found two seprate ways in wich to enable basic. Even if completly removed it could be re-introduced via a patch. I have some rather exciting news to be announced regarding this application, which I will make public once the app has been back up in the App Store for a few days, giving users time to download it.
Reply · Like · Mark as Spam
0

DNA - September 14, 2009 at 9:05am
C64.app with Colon and Semicolon. I have created a few patch files for the C64 Emulator for iPhone & iPod Touch that provide a Colon & Semicolon on the Numeric Keyboard, mainly for use in BASIC Programing. Unfortunately for now I have removed the AT symbol (@) as well as the Pound symbol (£) in order to provide the new additions. I plan on adding them back in a future release. You can follow the current status of this patch and more on my blog: ( http://dna.myhostclub.com/wp/ ) The current version (v1.0.1) requires knowledge of SSH and of Course, this will only work on a Jailbroken device. A installer is coming soon to Cydia. I will have more great info and patches etc up soon for this and other Apps.
Reply · Like · Mark as Spam
Recent