syncRage has released a new iPhone game: Fight Control! The game is based on an endless game principal, responsiveness and tactical thinking calls.

In Fight Control, thugs must be conducted in combat zones, so that they can fight each other in a duel. The aim is to let them take each other out. Three differently strong fighters enter the battle zone and look for the confrontation. The player must lead them via the touch control. Uneven struggles make it difficult to manage, because the winner will then have to be brought into a new fight. Managing gets increasingly tricky, since the game speed increases and more and more battles must be controlled.

Fight Control provides further more challenges. The degree of difficulty increases from map to map, patrolling guards must be avoided, and thugs surplus brought on hold. With the integrated Scoreloop connection players can measure each other on a global highscore list.

Fight Control has a very intuitive game play using the draw line technique on the touch screen. It requires fast reactions and tactical thinking on each of the three unlockable maps. Variedly challenging together with dynamic level of difficulty makes it easy to enter and hard to master. Also, thanks to its playful cartoon graphics and funny sound and music Fight Control is the exceptional gaming experience for in between.

Pricing and Availability:
Fight Control 1.0 for iPhone is only $0.99 (USD) and available exclusively through the App Store. 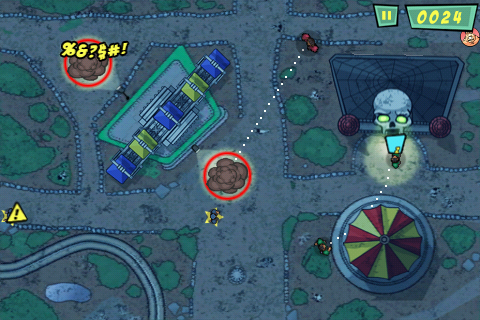