Verizon has announced that starting today you can switch to Verizon and receive up to $650 to end your contract with another network.

To convince customers to switch, Verizon is touting the quality of their network.

Did you know that 87 percent of T-Mobile customers and 86 percent of Sprint customers who switched back to Verizon within six months of leaving Verizon said “Network quality and performance” was the number one reason they came back?* In addition, Verizon’s network led in overall performance among national wireless service providers in four consecutive National RootScore Reports conducted by RootMetrics.

The $650 applies per line, so a family of four can use the incentive on each eligible line and receive up to $2,600.

Making the switch and getting up to $650 per line is simple: when you port your number to Verizon from another carrier, purchase a 4G LTE smartphone with a new device payment activation and trade-in your existing device from your previous provider. You’ll get up to $650 on a prepaid card for the installment plan balance less the device trade-in value (or up to a $350 prepaid card for early termination fees less the device trade-in value). Your trade-in must be in good working condition and be worth more than $0, and you must keep the new line active for a minimum of 6 months.

In addition, Verizon is promising switchers 2GB of bonus data, per month, for life.

As an added bonus, if you switch to Verizon and select the XL or XXL Verizon plan you’ll also get 2 GB of bonus data every month for life for as long as your device is active on the plan. That’s enough data to outlast even the longest car rides and family vacations: surf the web for 89 hours, stream 512 songs or navigate on Google Maps for 34 hours. 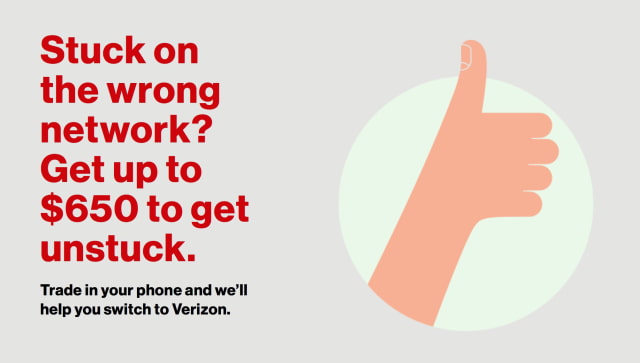 JoshvanHulst - December 29, 2015 at 10:57am
That's s great reason to switch, but still having unlimited data over 2GB is not a strong enough reason to switch over
Reply · Like · Mark as Spam

SimonSays - December 28, 2015 at 9:23pm
You must not have used t-mos new towers. This year they launched band 12. 700mhz spectrum. Their service is better than Verizon and att in my side by side comparison. But only iPhone 6s supports band 12. Older devices can't access that spectrum. My 6s plus is banging on their new signal. Always have full let coverage throughout Southern California. And way better reception in the hills than both Verizon and att.
Reply · Like · Mark as Spam
4 More Comments
Recent