Charitybuzz is once again auctioning off a lunch with Apple CEO Tim Cook and two VIP tickets to an Apple keynote event.

Bid now on this opportunity to have lunch with Apple CEO Tim Cook on campus in Cupertino, California, and to be his guest at an Apple keynote event!

Tim is listed by TIME magazine this year as one of the world’s 100 most influential people. In 2015, he ranked #1 on Fortune’s list of the World’s Greatest Leaders, and in 2014 he was named Person of the Year by the Financial Times.

This is the fourth time Cook is auctioned off his time for the Robert F. Kennedy Center for Justice and Human Rights. The first time the auction ended at $610,000, the second time it raised $330,000, and the third time it reached $200,000. 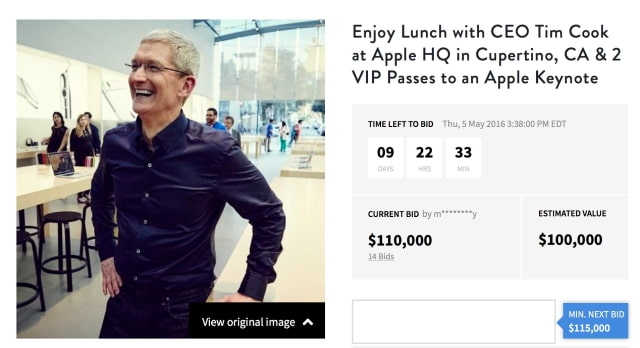