A recording of an internal Apple briefing entitled 'Stopping Leakers - Keeping Confidential at Apple' has been obtained by The Outline. The presentation led by Director of Global Security David Rice, Director of Worldwide Investigations Lee Freedman, and Jenny Hubbert, who works on the Global Security communications and training team, shows how far the company is going to prevent leaks.

During the hour long briefing, Apple's Global Security team revealed that it employs investigators around the would to prevent leaks from reaching competitors and the press. They also hunt down the source of leaks.

Historically, Apple's biggest source of leaks has been the factories in China. However, that's now changed. After a crackdown on security at factories, more breaches are now happening on Apple's campuses in California than factories abroad. “Last year was the first year that Apple [campuses] leaked more than the supply chain,” Rice tells the room. “More stuff came out of Apple [campuses] last year than all of our supply chain combined.”

Rice notes that Apple's work of screening employees is greater than that of the TSA. “Their peak volume is 1.8 million a day. Ours, for just 40 factories in China, is 2.7 million a day.” That number surges to 3 million when Apple ramps up production and each employee needs to be checked entering and exiting the factory.

“In aggregate, we do about 221 million transits a year. For comparison, 223 million is the top level volume for the top 25 theme parks in the world,” Rice says. “So this is just one big theme park. People coming in, coming out, there's billions of parts flying around at any given instance. So you marry up a bunch of parts moving around plus a lot of people moving around and it's no wonder that we don't leak even more.”

Since Tim Cook pledged to double down on secrecy, the team's efforts have resulted in a drastic drop in stolen parts.

The huge reduction in leaks was evident this month when Apple announced its new HomePod speaker at WWDC. Very little information about the device or the new iOS 11 software update reached the press ahead of its unveiling.

Later, during the employee Q&A, Rice gleefully recounts a blog post written by longtime Apple watcher John Gruber, in which Gruber criticized Apple scoop machine Mark Gurman, who now works at Bloomberg, for not having juicy details on Apple’s new HomePod speaker before it was released. “Even [Gruber] was like ‘Yeah, you got nothing.’ So he was actually throwing some shade out, which, like, ‘all riiight,’” Rice says, to the laughter of employees.

There's a lot more information from the meeting in The Outline's full report linked below... 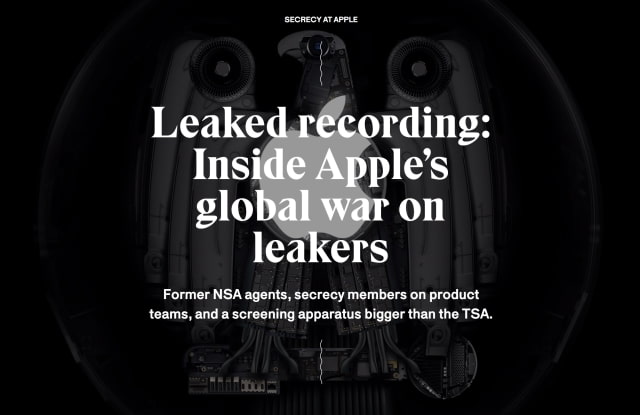