Despite 'stellar' iPhone X performance in Great Britain, China, and Japan, iOS performance has been mixed for the three months ending November 2017, according to data from Kantar Worldpanel ComTech.

Dominic Sunnebo, Global Director for Kantar Worldpanel ComTech comments, “On the surface Apple’s share figures for the three months to November struggle to impress, but taking into account the staged releases of the new iPhone 8 and iPhone X there are some strong performances. In Great Britain, Apple achieved its highest share in more than three years in the month of November, taking it to 49.4% and easily regaining the number one sales position from Samsung. The iPhone X was the best-selling model in Great Britain in November, with a 14.4% share of sales, though as the most expensive mass-market smartphone currently available it remains to be seen how long it can maintain this momentum at its current price point of £999.”

In the USA, the iPhone 8 and iPhone 8 Plus outsold the iPhone X in November; however, Apple did have the top three best selling smartphone models, easily beating the top Samsung model, the Galaxy S8, which came in sixth.

In Japan, the iPhone X was the top selling smartphone in November with an 18.2% share followed by the iPhone 8 with 17.2%.

In China, demand for the iPhone X is described as 'staggering' given its price point.

“Apple is now back on form – the iPhone X was the top selling model in urban China in November, with a market share of 6.0%. Unlike in Europe and the US, where the vast majority of new early iPhone X sales came from existing Apple smartphone owners, in urban China there are significant numbers of Huawei, Xiaomi and Samsung customers switching to the new iPhone models, which they deem a cut above the rest.” 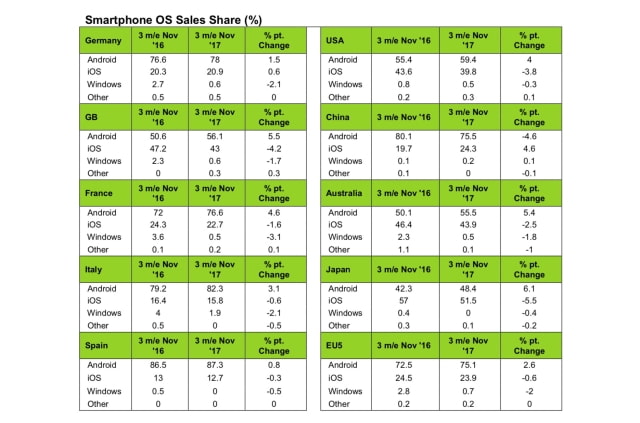 Rajiv - January 14, 2018 at 1:55pm
Nowadays fedup with IOS, i'm user of IOS since iphone 4(2010),iPad 1 and ipod touch 4 but nowadays frequent updates of ios and relaeasing unstable OS with bugs, also the jailbreak availability for more than 1 year not availabe on time, I also thinking to change android devices rather than IOS
Reply · Like · Mark as Spam
Recent