The larger drive was made possible by combining 32 of the new 1TB NAND flash packages, each comprised of 16 stacked layers of 512Gb V-NAND chips. These super-dense 1TB packages allow for approximately 5,700 5-gigabyte (GB), full HD movie files to be stored within a mere 2.5-inch storage device.

In addition to the doubled capacity, performance levels have risen significantly and are nearly twice that of Samsung’s previous generation high-capacity SAS SSD. Based on a 12Gb/s SAS interface, the new PM1643 drive features random read and write speeds of up to 400,000 IOPS and 50,000 IOPS, and sequential read and write speeds of up to 2,100MB/s and 1,700 MB/s, respectively. These represent approximately four times the random read performance and three times the sequential read performance of a typical 2.5-inch SATA SSD.

“With our launch of the 30.72TB SSD, we are once again shattering the enterprise storage capacity barrier, and in the process, opening up new horizons for ultra-high capacity storage systems worldwide,” said Jaesoo Han, executive vice president, Memory Sales & Marketing Team at Samsung Electronics. “Samsung will continue to move aggressively in meeting the shifting demand toward SSDs over 10TB and at the same time, accelerating adoption of our trail-blazing storage solutions in a new age of enterprise systems.” 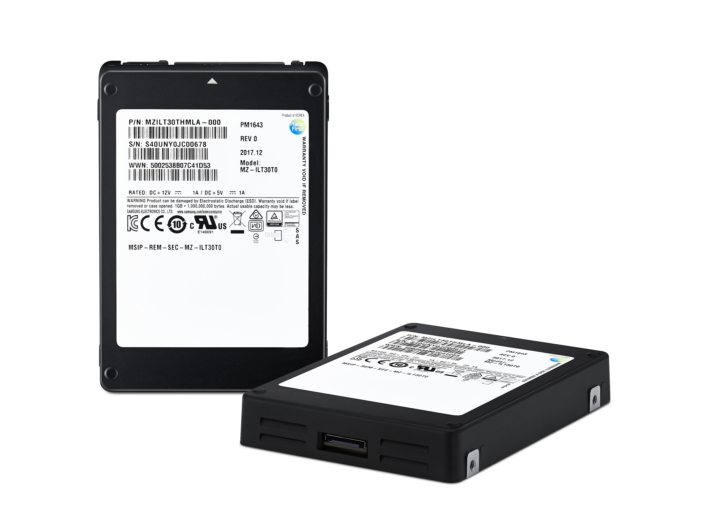 D4xM4Nx - February 21, 2018 at 11:14am
Enough storage to download all of Pornhub's videos brah! If Macs came with this bad boy, they'd be payed for a lifetime... with options to inherit them payments to sons or great sons TF.
Reply · Like · Mark as Spam
0

pickle rickle - February 25, 2018 at 2:25am
If the current trend continues MacBooks will come with 30Kb in their next model to push their awful data robbing cloud service
Reply · Like · Mark as Spam
0