Apple Pay is estimated to have over 252 million users, according to a new research note from Loup Ventures. While less than 20% of global smartphone users currently use a digital wallet, analyst Gene Munster believes that number will rise to over 80%.

Apple has several advantages to brand the iPhone as the premium digital wallet given its ability to integrate payments into both mobile and desktop operating systems, use its brand to win accepting retailers and supporting banks, and reassure users that transactions are secure and private. Separately, Apple Pay is the only digital wallet with all five payment pillars: mobile, desktop, in-app, peer to peer, and point of sale.

It's estimated that 31% of iPhone users have used Apple Pay in the past year compared to 25% a year ago. With the company's continued expansion into new markets, Loup Ventures expects to see transaction growth of 200% over the next 12 months.

Metrics:
● Over 1 billion cumulative transactions in Jun-18, a 3x increase in transactions y/y (source: Apple).
● Apple Pay now has over 4,900 bank partners (source: Apple).
● We estimate that Apple Pay now has over 252 million users, which equates to 31% of the active iPhone base (source: Loup Ventures).
● Adoption of Apple Pay continues to accelerate exponentially overseas compared to the U.S., with 85% of users being international vs. 15% in the US (source: Loup Ventures).

More details in the full research note linked below... 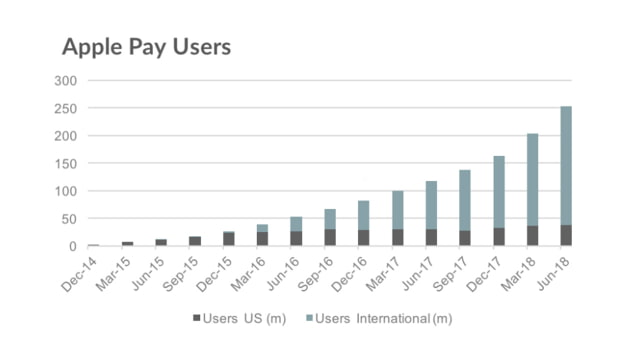