Apple buys fifty business class seats on United Airlines from San Francisco (SFO) to Shanghai, China (PVG) each day, according to promotional banners for United that were shared on Twitter today by LAflyer.

Apple is United's largest global account bringing in $150 million annually. It's followed by Facebook, Roche, and Google at over $34 million and Deloitte, McKinsey & Company, Cisco, Applied Materials, PWC, and Oracle at $12 million to $17 million. Intel, Visa, and Chevron have accounts worth over $10 million annually.

United says that its most important market for Apple is SFO - PVG. That route accounts for $35 million in annual revenue which is around 25% of Apple's annual spend. 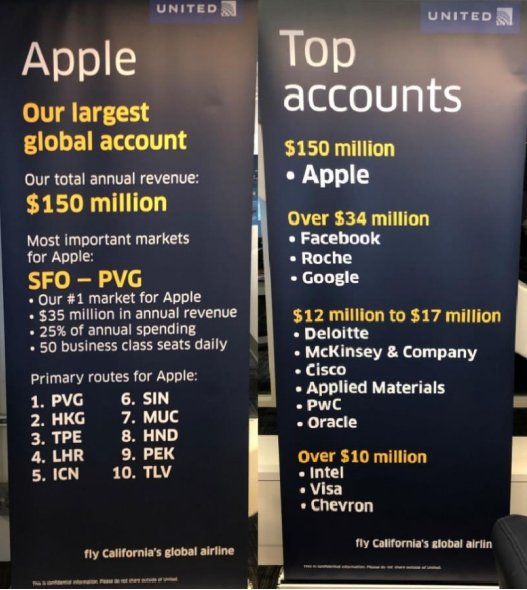 black9 - January 12, 2019 at 7:58am
Glaxo Smith Kline (GSK) pay for enough cargo and Business class seats on the LHR-RDU daily flight, it could run empty with no passengers even in business, and American Airlines still make a profit. The route is nicknamed the Glaxo Express.
Reply · Like · Mark as Spam
Recent