Apple's HomePod captured 6% of the U.S. market as of December 31, 2018, according to research from Consumer Intelligence Research Partners.

“Holiday shoppers helped the smart speaker market take off again,” said Josh Lowitz, Partner and Co-Founder of CIRP. “Relative market shares have remained fairly stable, with Amazon Echo, Google Home, and Apple HomePod accounting for consistent shares over the past few quarters. Amazon and Google both have broad model lineups, ranging from basic to high-end, with even more variants from Amazon. Apple of course has only its premium-priced HomePod, and likely won’t gain significant share until it offers an entry-level product closer to Echo Dot and Home mini.” 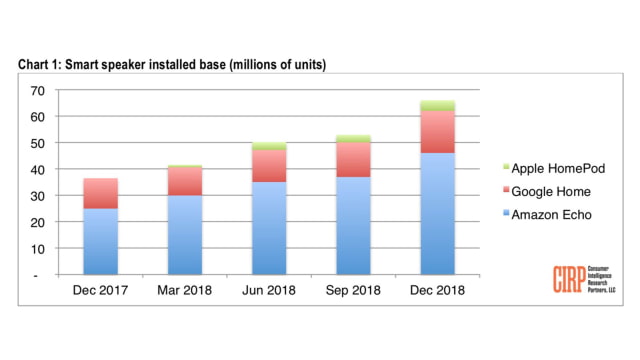 “Amazon and Google have succeeded in selling multiple units to a single household,” said Mike Levin, Partner and Co-Founder of CIRP. “Their strategies appear to include persuading owners to use smart speakers in multiple rooms, which helps create more active usage of the voice platform. And, Google has mostly caught up to Amazon in this strategy. A year ago, almost twice the percentage of Amazon Echo users had multiple units as Google Home users. Now, about one-third of both Amazon Echo and Google Home users have multiple units.”