Apple's much anticipated redesigned MacBook Pro may not arrive until 2021, according to analyst Ming-Chi Kuo.

UDN reports that the analyst has revised estimates for Apple's upcoming lineup of mini LED displays. 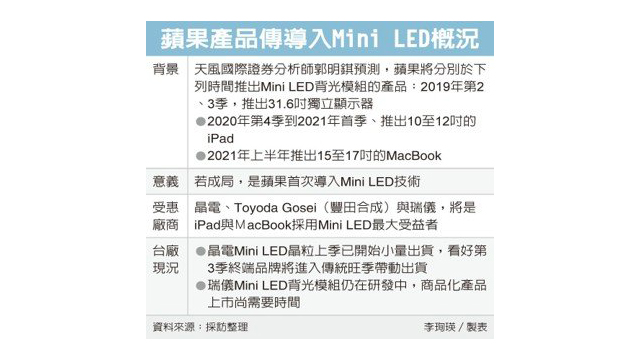 NoGoodNick - April 8, 2019 at 10:51pm
31 inches is hardly “mini”, so I’m unclear what the term even means. It seems ideal for the 2018 Mac Mini, but it’s not even referenced in the blurb. It’s hardly a portable width for laptops, so maybe they mean ‘smaller than a new Mac Pro, though whether it’s cheaper or not is another question.
Reply · Like · Mark as Spam

huudini - April 9, 2019 at 4:55am
Mini is a type of LED Display lighting that is comparable to OLED and used for cinema displays. So perhaps they are coming out with a new Thunderbolt Display?
Reply · Like · Mark as Spam

NoGoodNick - April 9, 2019 at 5:21pm
Ah, so the Light-Emitting Diodes are what is ‘mini’, meaning there are more ‘colors’ per inch. That makes sense, but when summarizing reports like this, it’s important to define the relevant terms, since they change so frequently. Seeing as this is ‘new’ technology, and they DON’T mention expected pricing, it’s NOT going to be cheap/cost-effective, so I won’t hold my breathe.
Reply · Like · Mark as Spam

NoGoodNick - April 9, 2019 at 5:38pm
Reading it again, I’m guessing Apple’s already decided that combining power and data transfer in a single cable is no longer feasible. They’re also talking about reintroducing the ‘break-away’ cable, which only makes sense in that context, though the patent is for USB 3 c cables. Splitting the two shouldn’t impact the iOS lightning port, but would impact MacBooks and Macs. Stay tuned for the next episode of ‘Which expensive investment will be worthless tomorrow’!
Reply · Like · Mark as Spam
Recent