To keep bringing you the best service possible, we’re updating our membership price to $49.99/month. The price for members billed through Apple will be $54.99/month. This new price takes effect today, April 10, for new members. Existing subscribers will see these changes reflected in their subsequent billing cycle after May 13.

YouTube has added some new channels alongside the price bump. Those channels are the Discovery Channel, HGTV, Food Network, TLC, Investigation Discovery, Animal Planet, Travel Channel, and MotorTrend. The service will also get the Oprah Winfrey Network later this year. In addition, EPIX is now available for an extra charge.

YouTube TV now includes 70+ networks, 6 accounts per household (each with its own unique recommendations and cloud DVR with no storage space limits), and 3 concurrent streams. It's all included in the base cost of YouTube TV. We also provide complete local affiliate coverage, with local feeds from all of the four largest broadcasters in over 90% of the markets where YouTube TV is available, and three of four stations in all the rest. And you can watch YouTube TV on any screen—mobile devices, tablets, computers and TVs. We will continue to expand the list of supported devices.

You can check out the channels available based on your zip code at the link below. Please follow iClarified on Twitter, Facebook, Google+, or RSS for updates. 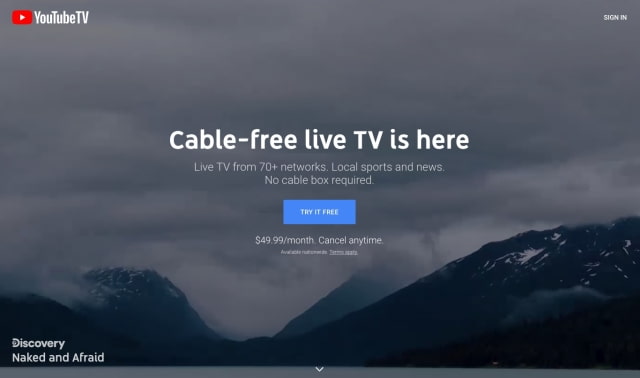 WiseGuy - April 13, 2019 at 9:31pm
Don’t watch any of the channels they added to ease the pain for the price gauge. And there’s nothing on Oprah’s network worth watching.
Reply · Like · Mark as Spam

1reader - April 10, 2019 at 8:09pm
Interesting how att increased their price recently and now Youtube Usually price are dropping to attract but this guys are getting greedier
Reply · Like · Mark as Spam

makedonce - April 10, 2019 at 8:06pm
I am happy that all these company’s are branching away from Apple , I am a huge apple fan but it seems they wanna control everything . You pay so much for a device and can’t even access your own files unless it’s through ICloud . Hope some of these politicians has enough balls to split apple .
Reply · Like · Mark as Spam

nickqlive - April 10, 2019 at 7:59pm
They gonna raise the price but still not offer surround sound wtf
Reply · Like · Mark as Spam

ichild - April 10, 2019 at 7:57pm
Everybody should cancel there subscription watch them fall but people are too weak to even begin to control these things like YouTube and all the rest.
Reply · Like · Mark as Spam
Recent