The rainbow colored stage spotted in the middle of Apple Park was built for a May 17th special event celebrating the formal opening of the new campus and the life of Steve Jobs, reports CultofMac.

According to an article on AppleWeb, thirty unique machined components form the building blocks for the massive rainbow arch. Those building blocks are used repeatedly so the structure can be setup and taken down for other special events. In total around 25,000 parts make up the structure and its metal skeleton.

“Once we had a design, we needed to figure out how to create something that was pristine and curved, that could sit outside, would be easy to put up and take down, and we needed to do all this in eight weeks,” Marissa Parr from Tait told AppleWeb. “To make all that happen, we realized we needed to make everything as uniform as possible, arch to arch.”

-----
If you’ve been to Apple Park lately, you’ve seen it: a rainbow has appeared in the middle of the ring. It’s the latest of Jony Ive’s team’s creations — this time crafted specially for our Apple family and the May 17 special event at Apple Park. The event is both a celebration of the opening of the new campus and a tribute to Steve. AppleWeb spoke with Jony about the design intent of this extraordinary structure.

On the inspiration behind the rainbow
It’s good to make things for other people. That is of course our preoccupation and our occupation at Apple. But it’s particularly special to be able to make things for the Apple team. That was the motivation and fuel to design and make Apple Park, and in the same way, it’s the motivation and the same sort of joy that we have had making the rainbow.

Our goal was to create a stage that would become immediately recognizable as the Apple Stage. The idea for the rainbow was one of those rare occasions where the earliest thoughts worked on a number of different fronts.

There is the resonance with the rainbow logo that’s been part of our identity for many years. The rainbow is also a positive and joyful expression of some of our inclusion values and I think that one of the primary reasons the idea resonated so immediately and so profoundly with us was the form — the connection from an aesthetic design point of view. A semi-circle relates so beautifully and naturally to the form of the ring.

On the design intent
We developed the idea to be a three-dimensional object so that it could be appreciated in the round — not just the front.

If you look at a plan view of Apple Park, the rainbow occupies an almost insignificant area. But it has a relevance and impact that is disproportionate to the area it occupies.

My space in Apple Park is on the external part of the perimeter. But I can see the rainbow reflected in the ceiling all the way through to where I sit. That truly wasn’t planned but one of those lucky accidents.

We had planned the way in which the colors interplay between the discrete bands of the rainbow throughout the day making it more vital and fluid. There are some wonderful but subtle combinations and reflections.

On the creative process
Our rainbow is typical of the design team’s multi-year collaboration with the architects Foster +Partners and designers Gainsbury and Whiting.

When we designed and developed Apple Park, one of the reasons that we enjoyed such an effective and close collaboration was our shared commitment to model making and prototype building.

The rainbow’s presence and optimism is keenly felt in many places and at the end of the day — it’s hard to find somebody that doesn’t love a rainbow.”
-----

Check out a drone video of the stage here and hit the link below to learn more about it. 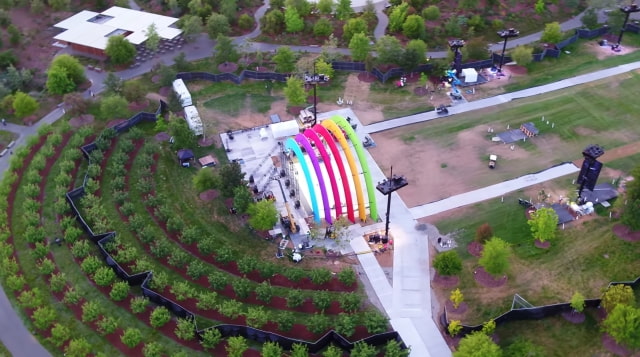 damonart - May 10, 2019 at 5:37pm
Apple is turning into a strange company. It’s getting more perverted by a day. I don’t bash the people but this’s an freaky agenda. Nothing creative or innovative is there to be seen or experienced.
Reply · Like · Mark as Spam

BritBratExpat - May 10, 2019 at 1:48pm
FFS what’s next? Giant-DILDO?! Wtf Apple? You have all the money in the whole freaking world to innovate. INNOVATE. Buy those home security companies like what Bezos have been doing! Would have been a great compliment with my Homekit stuff. At least buy those home security companies etc if you libNuts does not what to innovate!
Reply · Like · Mark as Spam