Apple has dropped to fourth in smartphone market share following the delayed launch of the new 5G iPhone 12, reports IDC.

In total, 353.6 million smartphones were shipped during 3Q20. Though the market declined, the results were stronger than the previously forecasted 9% year-over-year decline. This is largely attributed to the re-opening of economies around the globe as COVID-19 restrictions were gradually relaxed. India, Brazil, Indonesia, and Russia saw strong growth and volumes during the quarter.

"Although there was an element of pent-up demand that fueled market growth, it was mainly the array of heavy promotions and discounts that accelerated growth in these markets," said Nabila Popal, research director with IDC's Worldwide Mobile Device Trackers. "In India, distance learning has actually boosted the demand for low-end smartphones as they are a more affordable option compared to tablets. The increased low-end demand only further increases competition and adds pressure to the vendors' bottom line." 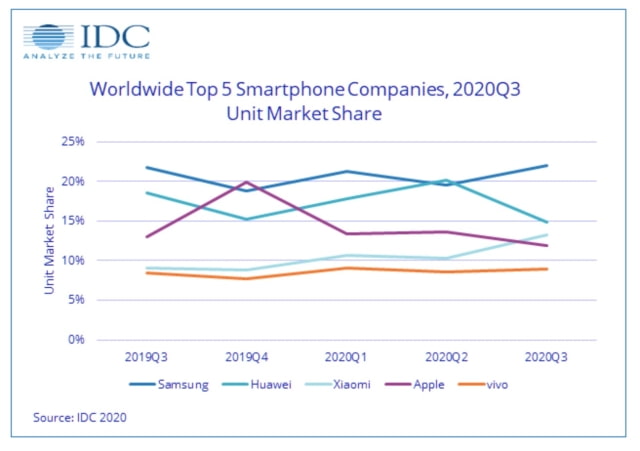 Smartphone Company Highlights
● Samsung reclaimed the top position in 3Q20 with a market share of 22.7% after shipping 80.4 million smartphones, up 2.9% year over year. In India, the largest market for Samsung and accounting for 15% of total volume, the brand significantly improved its position with close to 40% growth year over year thanks to its strong performance in the under $250 price segment and the online channel where its M series models did quite well. In the U.S., Samsung's second largest market, momentum was strong for the A series with good performances from the Note 20 and Note 20 Ultra as well, which contributed to almost 20% of total volume in 3Q20.

● Huawei lost the top spot and settled into the second position in 3Q20 with 51.9 million smartphones shipped and 14.7% share. The vendor suffered a large drop – down 22% year over year – with continued declines in international markets and a drop of more than 15% in China. The company continues to face challenges due to the ever increasing impact of the U.S. sanctions, which are taking a toll on its performance even in China as the brand is trying to pace out its shipments over a longer period.

● Xiaomi shipped 46.5 million devices to grab the number 3 position globally, beating Apple for the first time with 13.1% share and 42.0% growth. This is due to strong gains in India and a continued strong presence in China, which accounted for 53% of the company's volume in 3Q20. In India, Xiaomi's production capacity recovered to nearly 85% of its pre-pandemic level, which helped it cater to strong demand. Xiaomi's low-end portfolio, particularly the Redmi 9 Series, did well in both India and China. Xiaomi also launched the mid-range Redmi K30 Ultra and high-end MI 10 Ultra in China, which further captured consumers' attention.

● Apple shipped 41.6 million iPhones in 3Q20, down 10.6% year over year, which placed the company in fourth for the first time with 11.8% share. This drop was expected and is mainly due to the delay in the launch of the new iPhone 12 series, which is usually in the third quarter. Regardless, the iPhone 11 series did exceptionally well, contributing the majority of Apple's volume, followed by the SE device. Looking ahead, we expect Apple to grow in coming quarters with strong early demand for iPhone 12 paired with robust trade-in offers across major carriers, especially in the U.S.

● vivo returned to the Top 5 this quarter with 31.5 million units shipped for 4.2% year-over-year growth and 8.9% market share. Although the company is trying to grow its presence in other markets, India delivered massive growth of nearly 30% year over year in its low-end models under $200. In China, the brand enhanced the market positions of its S, iQOO, and X series phones that helped continue its strong presence there.

Check out the chart below and hit the link for IDC's full report. 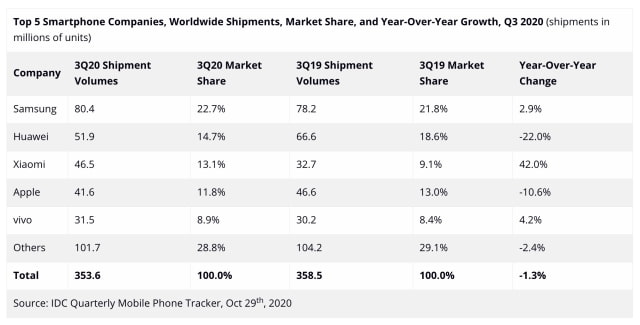