Apple's launch of the new M1 Mac mini has rocketed the company to the top spot in Japan's desktop PC market, according to a new report from BNC.

Prior to the launch of the new desktop, Apple was edging out Lenovo Japan for third place at 15%. However, immediately following the release of the M1 Mac mini its share jumped to 27.1% beating Fujitsu and NEC.

-----
Due to the launch of the new Mac mini, Apple 's share of sales volume by manufacturer in the desktop PC market has increased sharply, and it has become the top, as revealed from the " BCN Ranking" that aggregates the actual sales data of home electronics mass retailers and online shops. became.

The new Mac mini, which became the driving force for gaining the top share, is equipped with the first Apple chipset "M1". It has been talked about that it has high performance despite its low price.

* The "BCN Ranking" is an actual sales database that collects and aggregates actual sales data of personal computers, digital home appliances, etc. from major home electronics mass retailers and online shops nationwide every day, and is about 40% of the Japanese store market (PC). In the case of) is covered.
----- 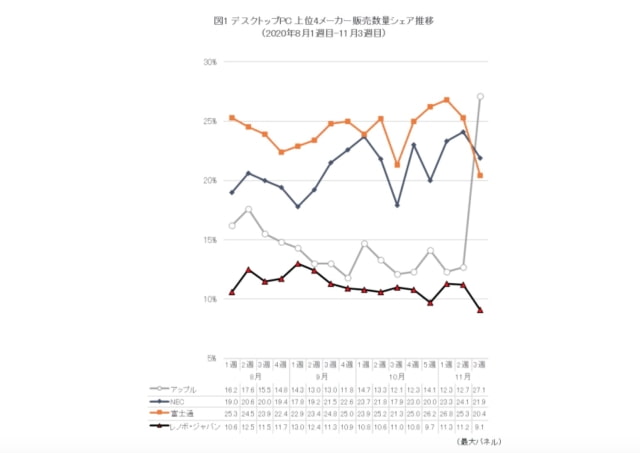