Ongoing strong demand in the holiday season led to a third consecutive quarter of sequential growth, with shipments in Q4 up 13% sequentially over what was a stellar performance in Q3. On the back of this remarkable recovery after a supply-constrained Q1, total PC shipments in 2020 grew 11% to reach 297.0 million units. This represents the highest full-year growth since 2010 and the highest shipment volume since 2014. Worldwide PC market growth in 2020 was singlehandedly driven by notebooks and mobile workstations. Shipments of these devices increased 44% from 2019 to reach 235.1 million units. Conversely, desktop and desktop workstation shipments fell 20% from last year to reach 61.9 million units in 2020. 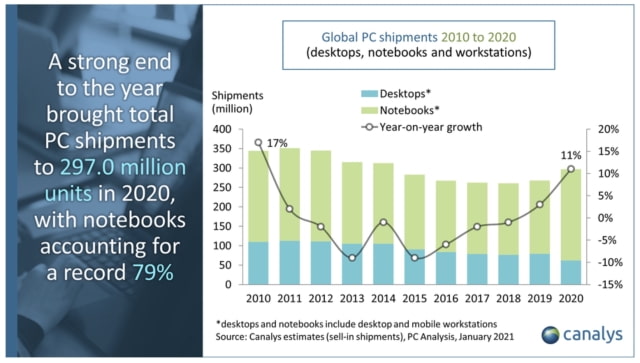 “The industry deserves all the success that has come its way,” said Rushabh Doshi, Canalys Research Director. “We would be in a very different position had it not been for the commitment of the PC industry, including the vendors, the supply chain and the distribution channel, to make sure that every bit of market demand was met. The digital transformation the world has undertaken over the past year is unparalleled, and PCs were at the heart of this change. As the world readies itself to get vaccinated and overcome the COVID-19 virus, it is important to remember that PCs have played a vital role at every stage of this fight, from understanding the virus and synthesizing the vaccine, to social monitoring and vaccine roll-out. It is going to be extremely difficult to write off the PC as some of us did a few years ago. PCs are here to stay.” 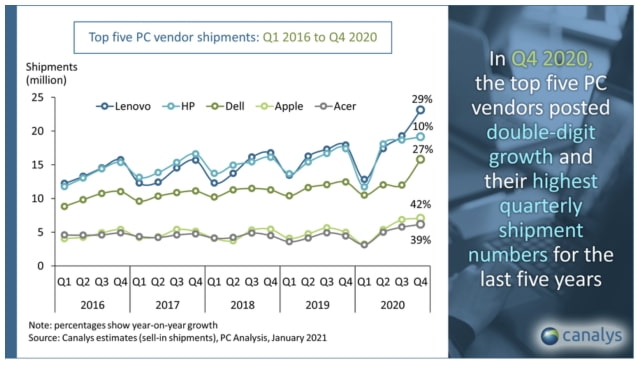