"While the shift in spending along with new products and typical seasonality were at play during the fourth quarter, the pandemic has also been good for the market as it has put health and fitness at the forefront of many consumers’ minds," said Jitesh Ubrani, research manager for IDC Mobile Device Trackers. "In-home fitness programs are quickly becoming a crucial component of the wearables offering for many companies. Beyond that, the proliferation of health sensors such as skin temperature, ECG, and heart rate tracking are allowing users and health professionals to better understand the onset and tracking of diseases." 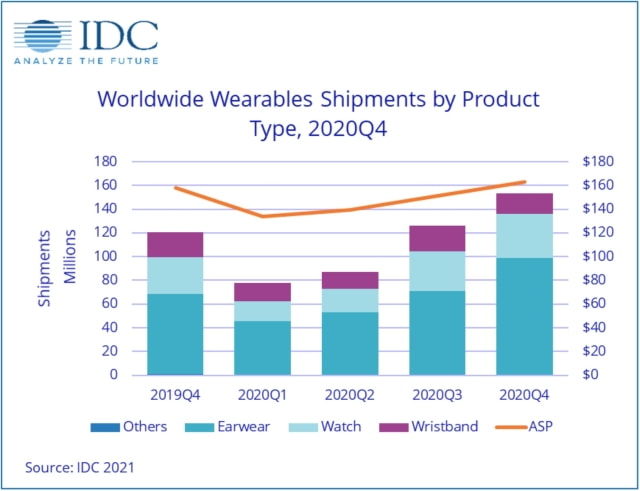 Notably, shipments of wristbands declined 17.8% during the quarter, accounting for just 11.5% of wearable devices shipped. Hearables made up a majority of shipments with a 64.2% share, followed by watches at 24.1%.

"2020 was the year that hearables became the must-have device," said Ramon T. Llamas, research director for IDC's Wearables Team. "Hearables provided a new degree of privacy, particularly during home quarantine but also while out in public. Meeting that demand was a long list of vendors with an equally long list of devices, spanning the range of feature sets and price points. Underpinning the hearables market was a constantly shifting competitive landscape, with companies slowly gaining a foothold in the market (Amazon and its Echo Buds and Frames), vendors introducing new form factors (Apple and AirPods Max), and new features making their way down the price curve, including automatic noise cancelling and voice assistant capability." 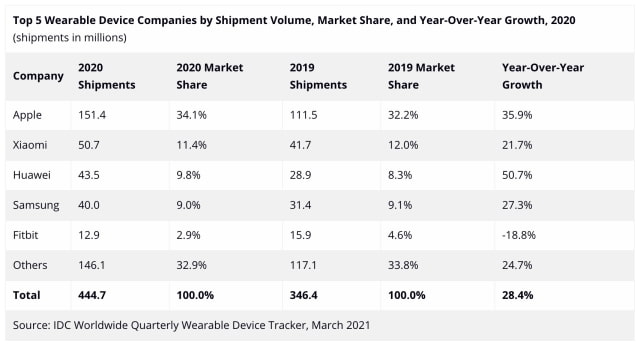 IDC says Apple led the market with a 36.2% share of 4Q20 shipments. Apple Watch shipments rose 45.6% and AirPods shipments grew 22% year over year, though that was down from 28% and 29% growth in the previous two quarters. 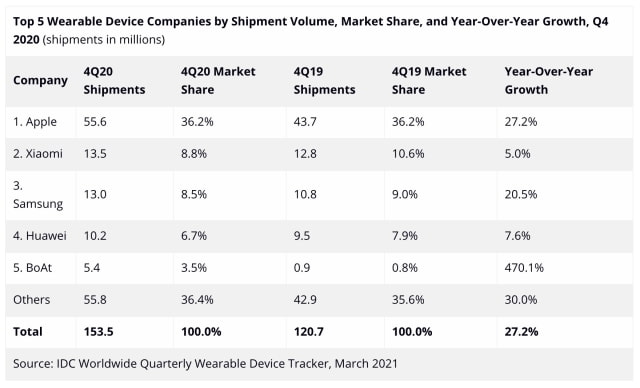