Samsung retook its position as the top smartphone maker in the first quarter of this year but Apple captured 42% of market revenue, according to Counterpoint research. That's over twice Samsung's revenue share of 17.5%.

Commenting on OEM rankings, Senior Analyst, Varun Mishra, added, “Samsung regained the top spot with the successful launch of the Galaxy S21 series, with pent-up demand across Europe, US, Korea and other markets. At the same time, the demand for iPhone 12 series remained strong as Apple reached a record first-quarter market share in the US, China, India and Japan. Xiaomi, OPPO and vivo registered an all-time high global market share globally and across markets such as China, Europe, Latin America and South Asia. All three brands successfully filled the gap left by Huawei and are positioned well to further grow across these regions.” 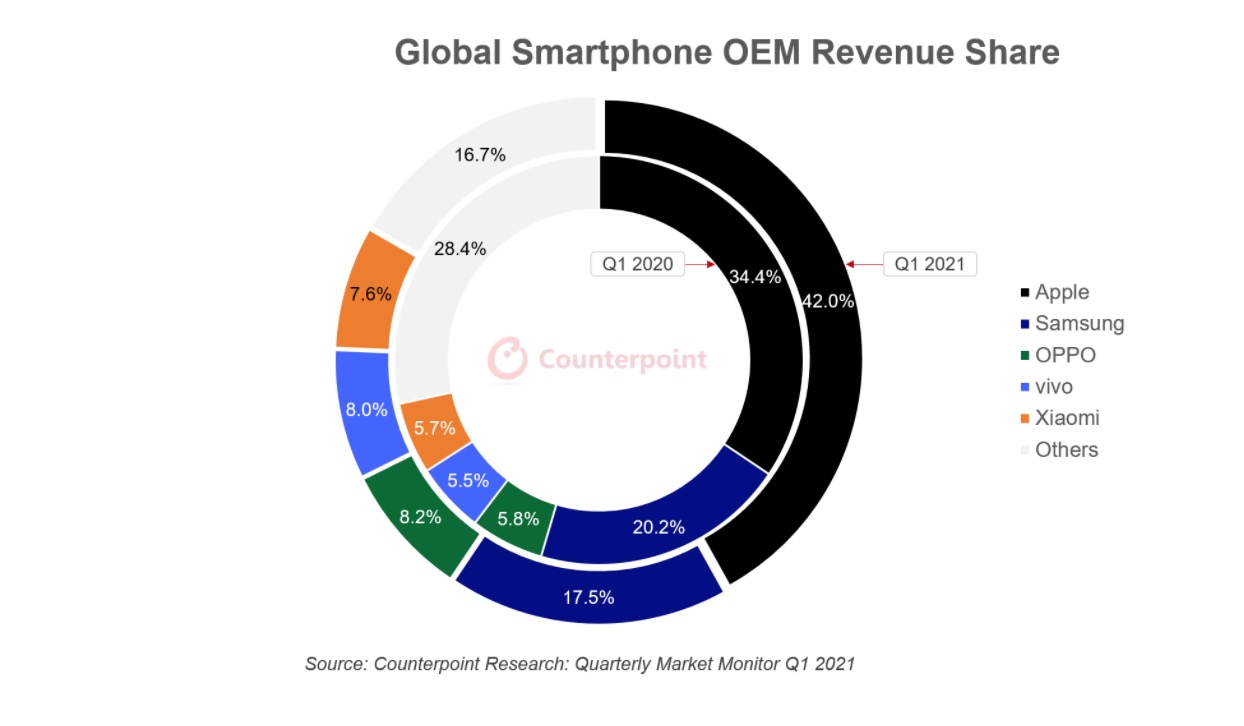 Highlights:
● Apple iPhone active installed base reached a new high this quarter. The strong performance of the iPhone 12 series helped Apple to clock record first-quarter revenue. iPhone revenue grew in double digits across all its geographic segments.
● Samsung’s growth, both in terms of revenue and shipments, is primarily due to the success of its latest S21 series. An important catalyst in the success of this series will be the expansion of 5G networks in the US and Europe. Samsung’s push into the mid-end segment with its successful A-Series devices was another major driver. Samsung also dominates and leads the niche foldable smartphone segment in terms of design, marketing, and shipments, but is expected to see greater competition from Huawei’s Mate X2, Xiaomi’s Mi Mix Fold, and 2021 launch expectations from vivo, OPPO, and TCL.
● Xiaomi‘s record smartphone shipments of 48.5 million smartphones were driven by markets like China, India, Spain, Italy, Russia and Indonesia. Xiaomi has been expanding further in Europe as well as in China, partially filling the void left by Huawei. The success of Xiaomi’s 11 series, K40 and Redmi Note 10 series helped Xiaomi post record quarterly revenue.
● OPPO too had a record quarter both in terms of revenue and shipments. OPPO shipped 38 million units globally, growing at a staggering 70% YoY. OPPO’s China performance has been especially impressive thanks to the successful rebranding of the Reno series and the strong momentum of the A series in the mid-segment and the Find series in the premium segment. OPPO is also aggressively expanding its presence in Europe, where it has doubled its share year on year.
● vivo‘s shipments grew by 64% YoY to reach its highest ever, 35.5 million units, in Q1 2021 driven by growth in China, where it has reached leadership position during the quarter. vivo and OPPO are fighting neck-to-neck for the leadership position in China which has been relinquished by Huawei. Vivo’s also benefited from a clear product positioning, consumer-friendly product line-up and the strong performance of its newly launched budget models with 5G capability and the equally strong performance of its premium X60 series. 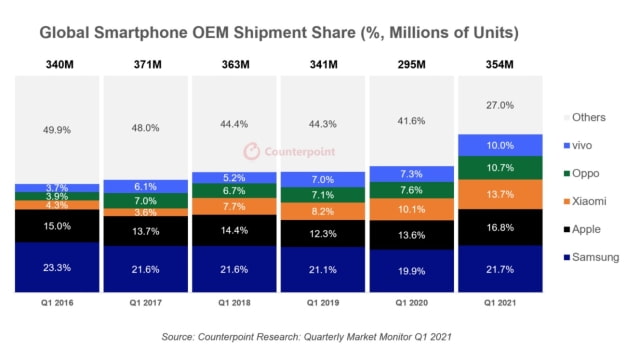