The launch of the iPhone 13 helped boost Apple's market share in Europe as supply constraints caused Xiaomi's sales share to drop significantly, according to a new Counterpoint report.

Europe’s smartphone market appears to have largely recovered from the effects of the COVID-19 pandemic, although sales are now being impacted by the ongoing chip shortage. Q3 2021 sales were only marginally down (-1%) compared to the same period last year, but were 4% down versus Q2 2021. 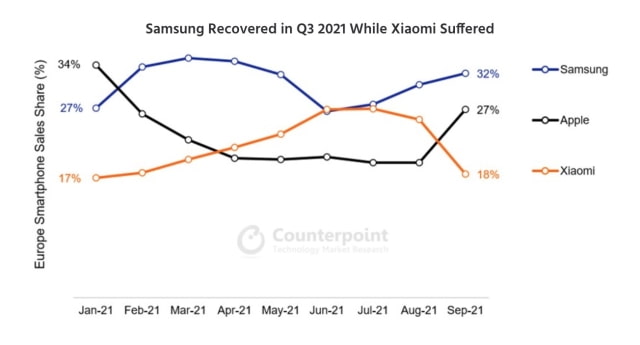 Counterpoint Research Associate Director Jan Stryjak said, “Xiaomi, Apple and OPPO have gained significant share over the last year. Xiaomi continued to grow well across most European markets while OPPO gained well in Western Europe, helped along by its recent merger with OnePlus. Apple, meanwhile, was boosted by the launch of the iPhone 13 towards the end of the quarter. The iPhone 12 was launched in early Q4 2020. Samsung retained its top spot having largely recovered from its supply woes earlier on in the year. But it was still down both annually and sequentially. Having said that, it could have been worse had it not been for the popularity of the Galaxy Z Flip 3, particularly in Western Europe.”

Stryjak added, “realme is one of the fastest growing brands in Europe and has firmly established itself as a top five vendor with strong sales in Russia, Spain and Italy. vivo is also growing fast, albeit from a smaller base, while Motorola and Nokia are staging a comeback. HONOR also has set sights on the European market in the hopes of a reversal of fortunes with its first major launch in the region in over a year in October.”

Counterpoint says the iPhone 13 was a big success for Apple, outpacing the popularity of the iPhone 12. If the company can keep up with the demand, it could be in for a record fourth quarter in Europe.