Apple has added support for Yahoo Messenger text, voice, and video chat to its iChat application for Mac OS X Lion, according to an AppleInsider report.

For Lion, Apple has added Yahoo as an account type. Yahoo operates its own proprietary protocol that can't interoperate with AOL or Jabber type accounts.

The other primary chat protocol is Microsoft's Windows Live Messenger, which is also proprietary and does not support cross chat with AOL or Jabber, although Microsoft and Yahoo have created a gateway between their two networks.

News of the new Yahoo client working with video and voice chat was initially reported by blogger iMarck90.

Yahoo Messenger was the first app to bring 3G video chat to the iPhone. 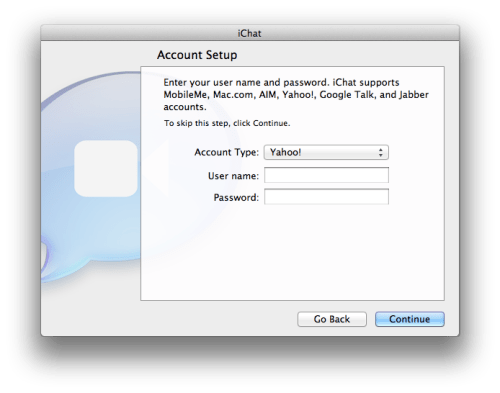 Sylvain - February 27, 2011 at 6:29am
Does it mean that Microsoft Messenger will be included too?
Reply · Like · Mark as Spam
2 More Comments
Recent