Apple has quietly updated the AirPort Extreme and Time Capsule.

The Time Capsule received a bump to 2TB and 3TB configurations; however, Apple has not detailed any other changes to it or the AirPort Extreme.

Both devices have received new part numbers and Engadget speculates that they may feature support for the new three-stream standard which does 450Mbps over both the 2.4GHz and 5GHz bands. Both the new iMacs and MacBook Pros are said to support these speeds.

It's unclear if the AirPort Extreme received an update to 6 internal antennas as rumored. The inevitable teardown by iFixIt will likely reveal more. 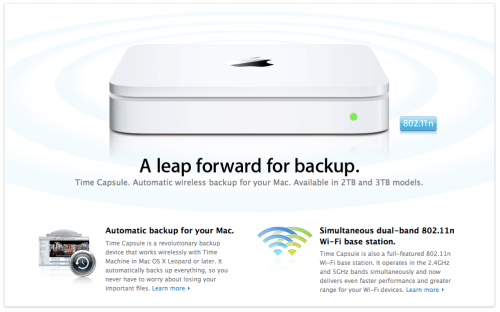