Intel has announced that its next chip will let your laptop run for 24 hours on one charge, remain on 'connected standby' for 10 days, and be continuously powered by a solar cell, reports Gizmodo.

This 22-nanometer 3D-transistor architecture consumes so little power-20 times less than their current gear-that it can run on a solar cell. That's exactly what they demonstrated at the Intel's Developer Forum today: a Haswell-based Windows computer running entirely off a solar cell that was being exposed to a light bulb. Imagine that. Basically, your computer would be able to run indefinitely without ever having to power off, even if you run out of battery power to run the machine's display.

Interestingly, Apple recently told Intel that it better drastically slash its power consumption or it would likely lose their business. 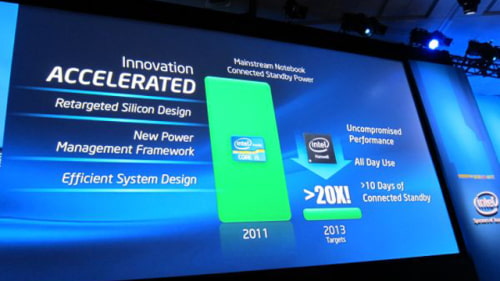 Nir Hus - September 13, 2011 at 8:52pm
This I have to see, and I wonder what is the effect on performance? Does it have different performance settings depending on it's available power? This is a big step forward. http://www.nirhus.com
Reply · Like · Mark as Spam
Recent