Alexia Tsotsis asked Michael Dell if he regretted his 'I'd shut down Apple' quote during a Q&A at the Web 2.0 Summit today.

In 1997, at the Gartner Symposium and ITxpo97, the CEO of Dell Computer offered his solution to Apple's problems. "What would I do? I'd shut it down and give the money back to the shareholders," Michael Dell said. At that time Apple was trading at $17 a share. It's now trading at around $420.

TechCrunch reports that Dell thought today was a "great opportunity" to clarify what he had said indicating that his previous "answer was misconstrued."

Dell said he originally refused to answer the question but after being pressed he responded "What would I do? I'd shut it down and give the money back to the shareholders," because he couldn't imagine himself being CEO of any other company.

"I have tremendous respect for Apple. Obviously Steve will be missed and was a friend."

When asked if he would have given a different answer about another company, Dell replied, "I am Michael Dell founder of Dell [and would ask] 'Why don't you give me another question?'." 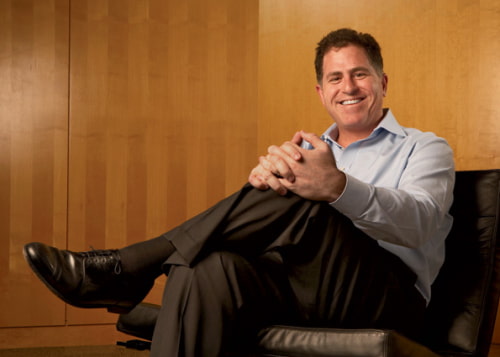 Shawn - October 18, 2011 at 11:25pm
I wish Dell would have dissolved the company and given back its shares to the shareholders. I sold my AAPL in 2002 and bought Dell. Since then: Dell down 50%. Apple up a couple of 1000%. Thanks for the advice Dell. I even bought 5 dells. From water-cooled XPS to Alienware laptops. All broke down. I had a dell technician living with me for 5 straight days to fix my XPS (and he failed. Got a new XPS). The new XPS had the same all fans at max speed problem. It got replaced with a brand new Alienware Aurora ALX with 6 core Intel. In that computer, the power cable to the graphic card had been destroyed at the factory. Dell could not fix that. A 50 cent cable. I got a full refund. The laptop computer with dual GTX 8800 gave me huge burn marks on my lap. Dell said that that was normal and would not fix it. They wrote about it in Scandiavias largest newspaper, and suddenly Dell gave me back my money + 70 dollar. (in US I would have gotten millions) I tried Dell. I really tried. Newer more the dark side.
Reply · Like · Mark as Spam