Marco Arment, the developer of Instapaper, suggests that a 4.94-inch 16:9 iPhone+ is plausible and posts some nice mockups of what the device might look like.

What if an iPhone Plus used Retina iPad screens with iPhone 5 resolution, keeping the rest of the design sized like an iPhone 5? Its 640 × 1136, 264 DPI screen would measure 4.94” diagonally, and it would look roughly like this next to an iPhone 5. 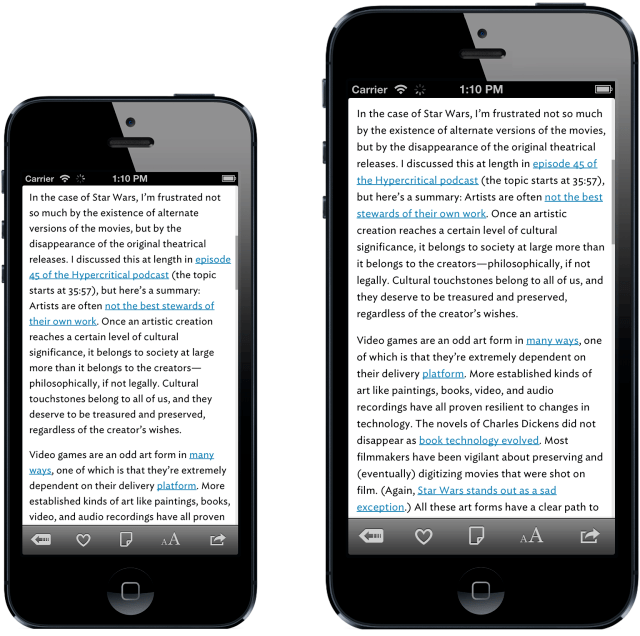 Arment notes that keeping the pixel dimensions the same as the iPhone 5 means that no app changes would be necessary and two-handed use would be easier because the touch targets would be larger.

One reason why Apple could consider a larger phone is the significant demand for larger devices. Another reason Arment puts forward is how the iPhone 5 looks on the shelf when placed next to its competitors. As you can see in the image below, the iPhone 5 does look rather small when put up against other devices.

Take a look at the images below for a better sense of what the larger device might look like.

Rockne1865 - February 11, 2013 at 12:22am
My idea phone Pad- Tablet is one that with a case fits in a shirt pocket a Tablet that is too big to fit in a shirt pocket holds no value for me because I might as well have a laptop more power more speed more storage!
Reply · Like · Mark as Spam

Mike Power - February 10, 2013 at 2:46pm
and it's going to be called Apple-Saucesung-get it Apple sauce-Apple and Samsung. now who sues who
Reply · Like · Mark as Spam