Aspyr Media and Activision Publishing have teamed once again with the announcement of Guitar Hero World Tour for Windows PC and Mac. Transforming music gaming by expanding Guitar Hero’s signature guitar gameplay into a cooperative band experience, Guitar Hero World Tour for PC and Mac offers state-of-the-art wireless controllers to computer gamers for the first time, new online and offline gameplay modes and a Music Studio feature for composing and editing original rock and roll anthems. Guitar Hero World Tour is the most complete music game to-date with 86 on-disc tracks from music legends such as The Eagles, Van Halen, Metallica, Michael Jackson and The Doors and features in-game appearances by world famous artists such as Ozzy Osbourne, Billy Corgan and Travis Barker.

“Guitar Hero World Tour is the standard for music games on consoles and we can’t wait to unleash this incredible experience on computer gamers,” said Ted Staloch, Executive Vice President, Aspyr Media. “With full band play, support for the new wireless controllers, the ability to create their own music and an amazing array of customization options, Guitar Hero World Tour will be the definitive music game on PC and Mac. We are proud to once again be working with Activision to extend this powerful brand to an eager audience of gamers.”

Guitar Hero World Tour delivers more ways to play than ever before. Virtual musicians can live out their rock and roll fantasies by playing either a single instrument in-game, or any combination of instruments within the game, in addition to the full band experience. Building on all of the online gameplay modes from Guitar Hero® III: Legends of Rock, Guitar Hero World Tour introduces Battle of the Bands mode, which allows eight players to join online and challenge each other band-to-band to determine who is the best of the best. In the Band modes, up to four players can jam together, online or offline, as they progress through the game. In single-player Career Mode, players can jam on any of the instruments in-game utilizing the controllers in branching venue progression enabling them to rock out in the order of their choice.

The game’s innovative new Music Studio lets players express their musical creativity by giving them access to a full complement of tools to create digital music from scratch, utilizing all of the drum kit controller and guitar controllers, and then play their compositions in the game.

Guitar Hero World Tour for PC and Mac will be available summer 2009. The game is rated “T” for Teen by the ESRB. 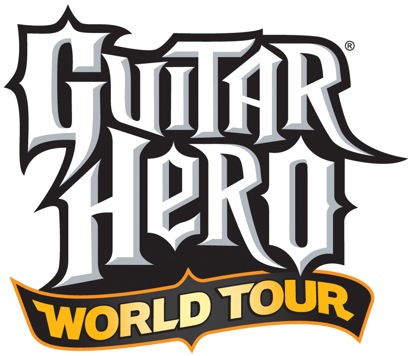