A possible leak of Fidos roadmap for 2009 includes evidence of a $99 4GB iPhone with video calling (iChat), according to a BoyGeniusReport.

The most notable slide has to do with a 4GB iPhone 3G. While there is a huge disclaimer that the image isn’t the device itself, the slide depicts a 4GB iPhone model that will run for $99 and come with quad-band EDGE, tri-band HSDPA, a 2 megapixel shooter and, believe it or not, iChat video calling (oh hi, front-facing camera). You might recall all of that talk of a $99 iPhone at Walmart that we brought you a while ago — it looks like the timing was a bit off but it may actually happen.

This news comes just on the heels of an Engadget article which suggests that Apple has received approval for new iPhones in 4GB, 8GB, 16GB, and 32GB capacities. 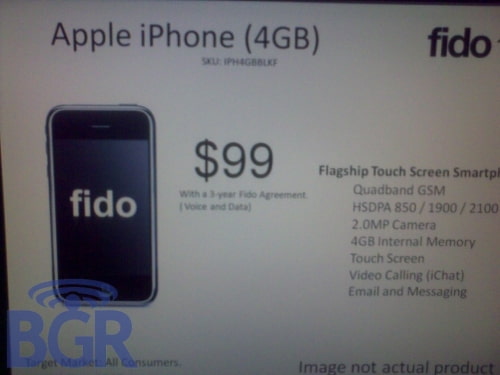