CIRP finds that among the major phone brands, Apple had the largest share of the US market, with half of all phone sales.

“The strength of the September 2014 launch of the iPhone 6 and 6 Plus fueled Apple’s dominance in US mobile phone sales this quarter,” said Josh Lowitz, Partner and Co-Founder of CIRP. “Apple had
virtually double the sales of Samsung, and five times that of LG. No other brand accounted for as much as 5% of US sales. The Amazon Fire and Blackberry smartphones registered slight share, which we attribute to random sample fluctuation as much as actual sales.”

“By every measure, Apple’s 2014 phone launch was a success,” continued Lowitz. “ iPhones drew from loyal Apple customers, with 86% of buyers upgrading from an older iPhone. Samsung and LG saw far lower loyalty rates, with 25% of Samsung owners and 18% of LG owners who activated a phone in the quarter switching to an iPhone.”

The CIRP study was based on a small number of subjects; however, all signs point to a huge quarter for Apple. Another recent report from Counterpoint Research found that Apple's share of smartphone sales in Asian markets has soared. 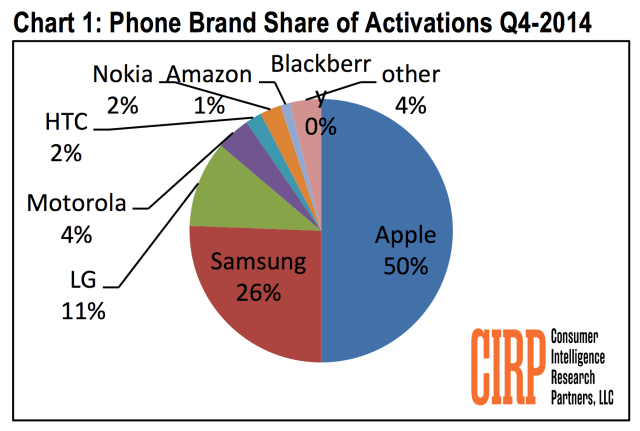 TechnoGeek - January 23, 2015 at 11:18pm
Blackberry has always been allowing employers and goverment to snoop into the phone. That is why it's still popular in Canada as this is the vulture they are accustomed to. Well,.. we all evolve and no one is looking into my sh#% unless I choose to have them look into it. Nothing to hide but nothing to show.
Reply · Like · Mark as Spam

Ren - January 23, 2015 at 9:10pm
Funny how they mocked Apple from being too worried like bbm did, should've stayed focused and would be close to what Apple has, for shame!
Reply · Like · Mark as Spam

NoGoodNick - January 23, 2015 at 7:34pm
I love how Blackberry, the company bitching about Apple's messaging service not being "open enough" to government snooping, is rating as having 0% market share. Apparently a few people disagree with the CEO's views on what's an appropriate level of law enforcement 'co-operation' (i.e. capitulation).
Reply · Like · Mark as Spam
Recent