The black Apple Watch Sport band was the most popular selection among customers who pre-ordered the Apple Watch, according to Slice Intelligence.

The Black Sport Band was by far the most popular among both Apple Watch and Apple Watch Sport buyers, with 49 percent overall pre-ordering one, followed by the White Sport Band at 16 percent and the more expensive Milanese Loop ($149 versus $49 for the black Sport band) rounding out the top three at around 10 percent.

Slice Intelligence gets its data by extracting detailed information from hundreds of millions of aggregated and anonymized e-receipts. They calculated that about 1 million customers pre-ordered the Apple Watch on the first day of sales in the U.S.

Check out the chart below to see which bands were most popular. Did you chose the black band? 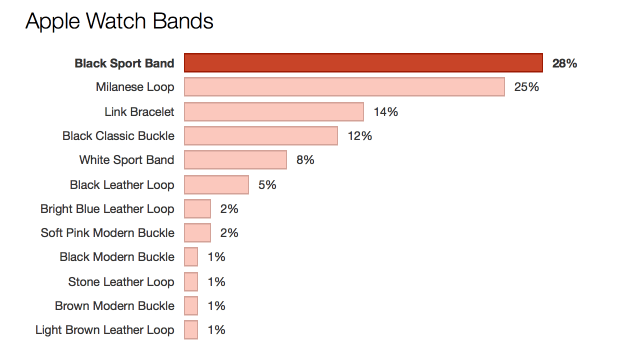 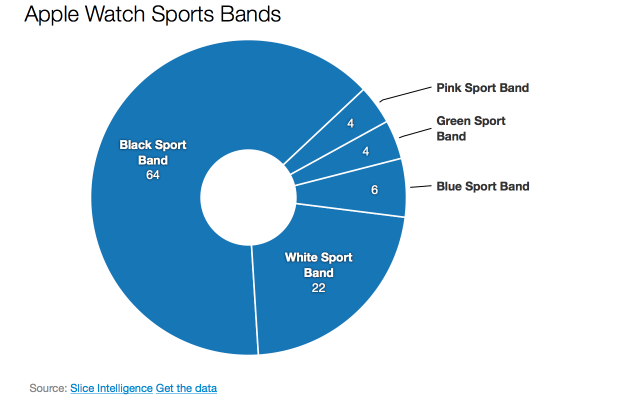 Sillydrew777 - April 13, 2015 at 2:53pm
Am I the only one that liked the Milanese Loop but once I looked at it in person it seems too thin for the price? i wouldn't mind the link but they want too much for what it is. Just my opinion though.
Reply · Like · Mark as Spam

SimonSays - April 13, 2015 at 2:21pm
I think those who got the watch sport are going to regret it. It's so easy to bang your watch here and there in daily use. I got the stainless because I have scratched cheaper watches in the past yet my saphire screened mechanical watches still look perfect.
Reply · Like · Mark as Spam