“The response to Apple Watch has surpassed our expectations in every way, and we are thrilled to bring it to more customers around the world,” said Jeff Williams, Apple’s senior vice president of Operations. “We’re also making great progress with the backlog of Apple Watch orders, and we thank our customers for their patience. All orders placed through May, with the sole exception of Apple Watch 42 mm Space Black Stainless Steel with Space Black Link Bracelet, will ship to customers within two weeks. At that time, we’ll also begin selling some models in our Apple Retail Stores.”

Apple notes that 10 Corso Como in Milan, BOONTHESHOP Cheongdam in Seoul and Malmaison by The Hour Glass in Singapore will have a special, curated selection of the Apple Watch available at Launch. The Apple watch is currently available in 9 countries including Australia, Canada, China, France, Germany, Hong Kong, Japan, the UK and the US.

Apple has not released any data on the volume of sales or orders for the Apple Watch, but some analysts believe it has sold around 7 million units so far. 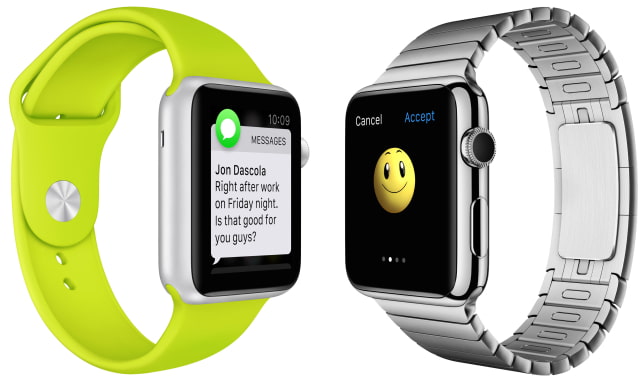 yas9in - June 4, 2015 at 2:10pm
I was going to order that. in retrospect kinda glad I didn't cuz I got my stainless steel model with sport band on 24 April. I'll get the prettier one next year.
Reply · Like · Mark as Spam