The Company posted quarterly revenue of $62.9 billion, an increase of 20 percent from the year-ago quarter, and quarterly earnings per diluted share of $2.91, up 41 percent. International sales accounted for 61 percent of the quarter’s revenue.

Revenue from Services was up 17% year over year and revenue from Other Products was up 31%.

“We’re thrilled to report another record-breaking quarter that caps a tremendous fiscal 2018, the year in which we shipped our 2 billionth iOS device, celebrated the 10th anniversary of the App Store and achieved the strongest revenue and earnings in Apple’s history,” said Tim Cook, Apple’s CEO. “Over the past two months, we’ve delivered huge advancements for our customers through new versions of iPhone, Apple Watch, iPad and Mac as well as our four operating systems, and we enter the holiday season with our strongest lineup of products and services ever.”

“We concluded a record year with our best September quarter ever, growing double digits in every geographic segment. We set September quarter revenue records for iPhone and Wearables and all-time quarterly records for Services and Mac,” said Luca Maestri, Apple’s CFO. “We generated $19.5 billion in operating cash flow and returned over $23 billion to shareholders in dividends and share repurchases in the September quarter, bringing total capital returned in fiscal 2018 to almost $90 billion.”

Apple is providing the following guidance for its fiscal 2019 first quarter:
● revenue between $89 billion and $93 billion
● gross margin between 38 percent and 38.5 percent
● operating expenses between $8.7 billion and $8.8 billion
● other income/(expense) of $300 million
● tax rate of approximately 16.5 percent before discrete items

Apple’s board of directors has declared a cash dividend of $0.73 per share of the Company’s common stock. The dividend is payable on November 15, 2018 to shareholders of record as of the close of business on November 12, 2018.

Apple will provide live streaming of its Q4 2018 financial results conference call beginning at 2:00 p.m. PDT on November 1, 2018 at www.apple.com/investor/earnings-call/. This webcast will also be available for replay for approximately two weeks thereafter. 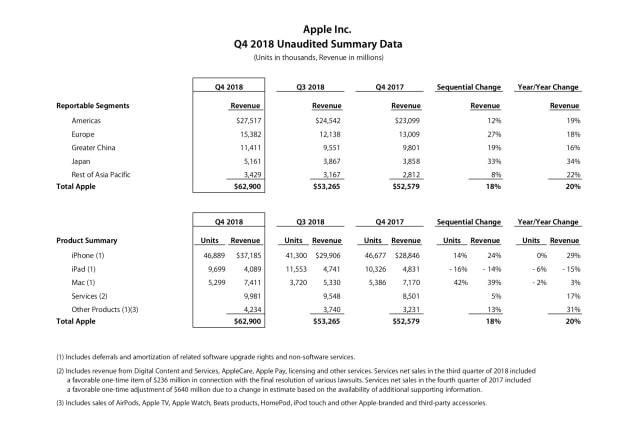