OpenSignal has released a new report revealing the average iPhone 4G download and upload speeds by model in the United States.

But by choosing to keep a less capable older iPhone model – such as the iPhone 5s or 6 – consumers are unable to benefit from the latest network technologies launched by the carriers. In OpenSignal’s measurements they experience significantly slower mobile network speeds than those with newer iPhone models: in the U.S., iPhone 5s users experience 4G Download Speeds of just 10.2 Mbps compared with 21.7 Mbps for the latest iPhone XS Max. 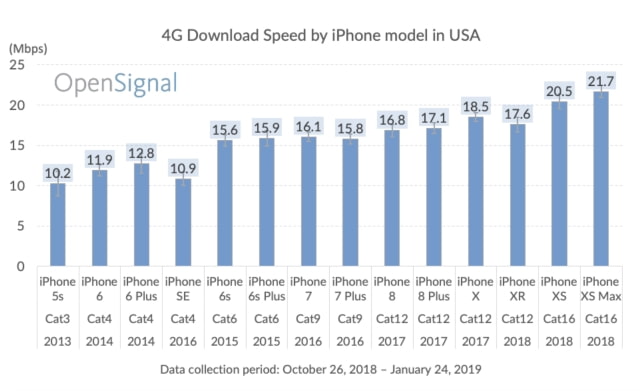 Notably, users do not see a significant jump in performance with each iPhone model. OpenSignal found that the iPhone 5s, 6, 6 Plus, and SE were bunched closely together as were the 6s, 6s Plus, 7, 7 Plus, 8, 8 Plus, X, and XR.

● New iPhone XS models with LTE Category 16. The industry made a big push around the importance of this particular advance, marketing it as “gigabit LTE”. While we are far from seeing real world speeds reach a gigabit, OpenSignal’s data does show that owners of iPhone XS and XS Max models experience by far the fastest 4G Download Speeds, which are 26% faster than the middle grouping of iPhone 6s, 7, 8, X and XR, and a tremendous 83% faster than the slowest grouping.
● “Middle aged iPhones” which support LTE Category 6 – 12. These models include all iPhones released between 2015 and 2017, excluding the iPhone SE and including 2018’s iPhone XR. Our data shows they experience average 4G Download Speeds of 16.82 Mbps which is 4.4 Mbps slower than the latest iPhone XS models.
● “Senior iPhone models”. The group of iPhone models where users experience the slowest speeds includes not only the oldest models from 2013, but also 2016’s iPhone SE, which remains on sale in some markets. Owners of iPhone models in this group experienced average speeds of just 11.6 Mbps according to our data, or 9.7 Mbps slower than the XS range, and will see the biggest improvement if they switch to a more capable model.

Check out the charts below for more details and hit the link for the full report. 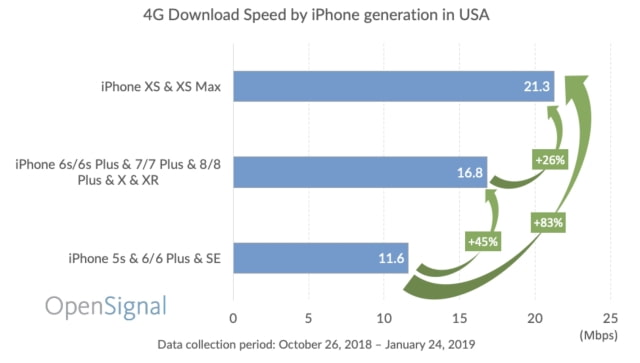 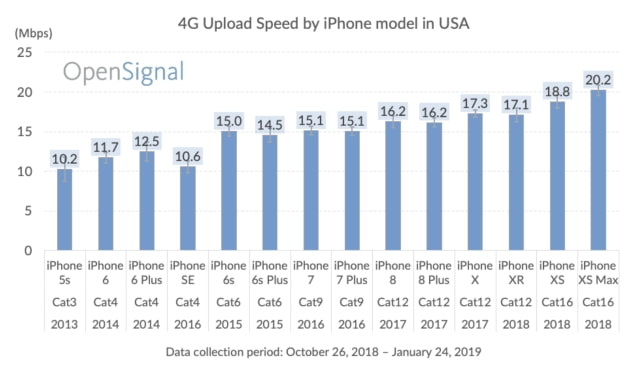 joshWUa. - February 16, 2019 at 8:45am
Don’t believe the numbers, who came up with these anyway. Every cellphone tower is different traffic-wise.
Reply · Like · Mark as Spam
Recent